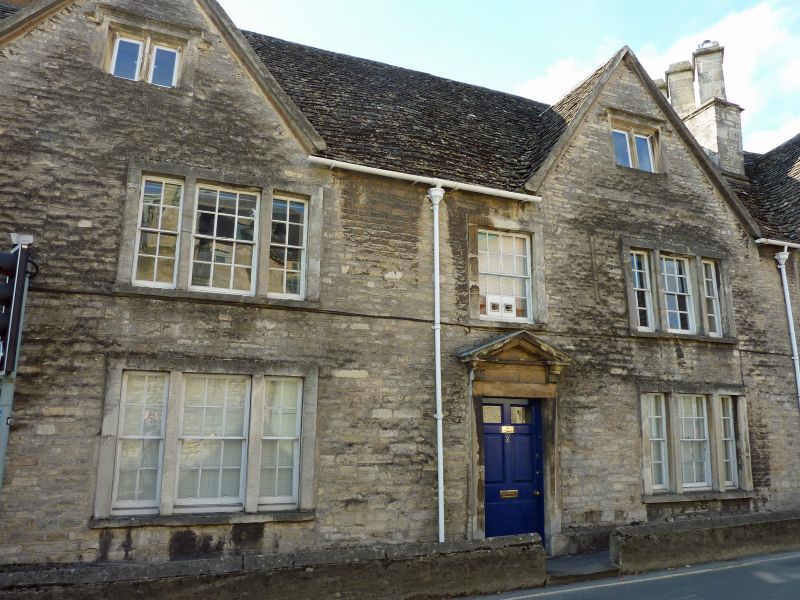 GV II*
A house, now offices, dating from the early and mid- to late-C17 with mid-C18 and C20 alterations; there is some archaeological evidence of an earlier building on this site. The bay to the north now forms part of 1 Querns Lane (qv).

MATERIALS: The building is constructed from coursed, squared limestone rubble to the front, set under stone slate roofs. There is a stone ridge stack with three diagonally-set ashlar flues to the north, and a pair of ashlar ridge stacks to the south.

PLAN: The house is rectangular on plan, occupying a corner plot, facing Watermoor Road. The interior is single depth, with a large entrance hall to the centre of the building, with one principal room to the south and one to the north; the room furthest to the north now forms part of 1 Querns Lane.

EXTERIOR: The building is of two storeys and attic, with three gabled bays to the east. Ground and first floor windows are tripartite, with stone mullions and flat unmoulded surrounds, housing six-over-six sashes flanked by four-over-four sashes. There is a roughly central six-panel door, with an open pediment on brackets forming a hood. The gables house two-light, stone mullioned windows with hoodmoulds; one is ovolo-moulded, one is hollow-chamfered, and that to the south is blocked. The south side of the main range has a mid-C18, three-storey canted bay with eight-over-two sashes to ground floor, eight-over-eight sashes to first floor, and six-over-six sashes to the attic. The rear elevation has two short gabled wings, that to the north with a two-light ovolo-moulded stone mullioned window, that to the south with a two-light hollow-chamfered stone-mullioned window, two two-light chamfered stone mullioned windows to first floor below, and one similar window and one twelve-over-twelve pane sash to the ground floor. There is a small, flat-roofed, tile-hung extension of the mid-C20 to the rear elevation, which is not of special interest.

INTERIOR: There is a late-C17 closed-string open-well staircase with heavy turned balusters set towards the rear and south of the building. The central hall has a late-C18 timber fireplace, and moulded cornice which appears throughout much of the ground and first floors and stairwell. The principal room to the south has a late-C18 stone chimneypiece and C17 panelling with some C18 alterations including an alcove cupboard to right of the chimneybreast. The ground floor room in the third bay towards the north, perhaps part of the former kitchen, has an alcove with a marble shelf and small inset marble basin, probably dating from the early C18. The first floor has several rooms off a corridor to the rear. The room in the third bay towards the north, which is now subdivided, has an early-C17 stone chimneypiece, elaborately carved, with a moulded Tudor-arched opening, and a late-C18 grate. The room has early-C17 painted panelling, a foliate plaster frieze and two plastered beams with decorated soffits in a matching foliate design, one now contained within the next room. The attic storey has a series of interconnecting rooms with exposed roof structure showing trusses formed from paired principal rafters with tie beams, twin purlins and high collars. The room to the northernmost bay is unimproved.

HISTORY: 2 Watermoor Road was formerly Chesterton Manor, and appears to have originated in the early C17; there is some archaeological evidence of an earlier manor on the site, though this is not clearly evident in the current fabric. Alterations were made in the later C17, and again in the C18, though much of the house as it stands today represents the C17 phases. The house was a four-bay structure running north-south along Watermoor Road, with its northern bay occupying the corner with the road which is now Querns Lane. During the early C19, a warehouse, owned by the local Bowly family and in use as a cheese warehouse, was built along Querns Lane, a short distance from the northern bay of Chesterton Manor. A map of the 1840s shows both buildings in situ, with a gap where the linking building which now forms part of 1 Querns Lane would be constructed in the 1850s. The Ordnance Survey map series shows that the bay now forming part of 1 Querns Lane may have been separate from the main house from as far back as 1875, though it is also shown as a separate unit from the 1850s infill block which forms part of 1 Querns Lane. The two buildings were formally divided in 2003.

SOURCES
Verey D, Buildings of England: Gloucestershire I, 'The Cotswolds' (1970) 182

REASONS FOR DESIGNATION: 2 Watermoor Road, is designated at Grade II*, for the following principal reasons:
* Architectural interest: the building, formerly Chesterton Manor, dates from the early C17, and is a substantial house in a traditional Cotswold vernacular style, with a handsome gabled elevation demonstrating some architectural pretension
* Interior: it retains a number of significant interior features from the C17, including two panelled rooms, one with a high-quality, foliate-scrolled plaster cornice and similarly decorated beams
* Fixtures and fittings: there is in addition a very good C17 chimneypiece with highly-decorative carved overmantel, and a good, C17 open-well, closed-string stair with turned balusters, rising from the ground floor to the attic
* Fixtures and fittings: a phase of alteration in the C18 introduced a number of further good-quality interior features, including a number of fireplaces and alcoves, as well as classicising the main elevation and introducing a new canted bay to the south
* Evolution: the C18 alterations to the building are of good quality and enhance the earlier house