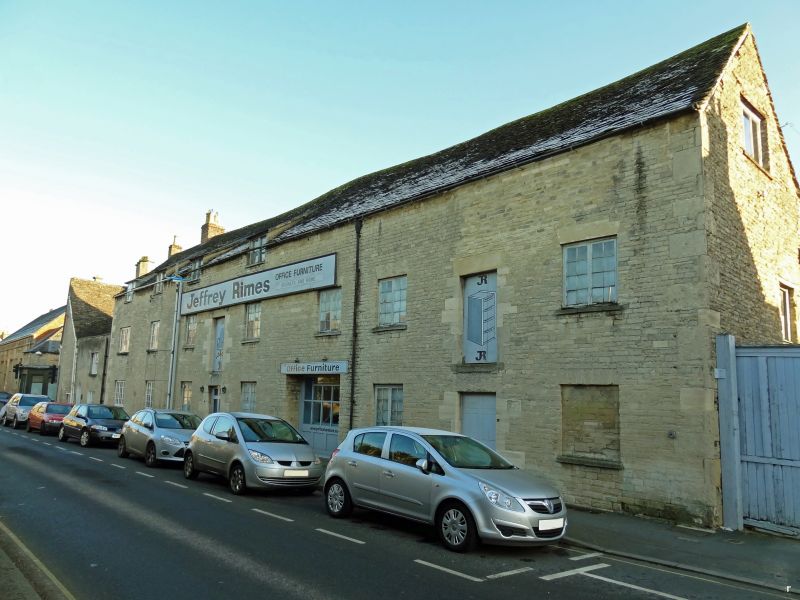 Also Known As: BOWLY'S CHEESE WAREHOUSE, QUERNS LANE
A warehouse of the early C19, now retail premises and a dwelling. The easternmost bay and the ground and first floors of the adjacent bay to its west are part of a separate property, 1 Querns Lane (qv).

MATERIALS: The building is of rendered coursed limestone with dressed limestone quoins with limestone stacks, under Cotswold stone slate roofs.

PLAN: The warehouse is single depth on plan. A wing which is built onto the rear extends over part of the warehouse from the adjacent building, 1 Querns Lane.

EXTERIOR: The warehouse has two storeys and attic. The windows are multi-paned, timber casements and the eastern two bays of the attic have raking half-dormers. The warehouse is in two sections: to the east, a two-bay section which was formerly the domestic end of the building, now part of 1 Querns Lane apart from the attic storey of the second bay from the east, which is the subject of a flying freehold in favour of 3 Querns Lane. The remainder is a seven-bay industrial section, which has taking-in doors at first floor level and a wide double doorway to the ground floor. Both ends of the building have large, dressed limestone quoins. The central bay of the warehouse has circular windows at first floor and attic levels, and a fairly substantial C20 extension, which is not of special interest.

INTERIOR: The warehouse has exposed chamfered beams running from front to rear. The interior was not fully inspected.

HISTORY: During the early C19, a warehouse, owned by the local Bowly family and in use as a cheese warehouse, was built along Querns Lane, a short distance from the northern bay of Chesterton Manor. A map of the 1840s shows both these buildings in situ, with a gap where the linking building which now forms part of 1 Querns Lane would be constructed in the 1850s. There are indications in documentary sources that this new section was constructed to provide a house for the manager of the warehouse, and this is supported by the fact that it incorporates the former domestic end of the early C19 warehouse. A gabled wing was constructed in the mid-C19 across the rear of the 1850s section and the domestic end of the warehouse, confirming that they were both in the same ownership at this date.

REASONS FOR DESIGNATION DECISION:
3 Querns Lane, the larger part of an early C19 warehouse, is listed at Grade II, for the following principal reasons:
* Architectural interest: a well-preserved warehouse of the early C19, which clearly demonstrates its industrial heritage in its fabric; the building retains its original pattern of fenestration and taking-in doors, and its early C19 timber windows
* Interior: its interior has good-quality, exposed chamfered beams and retains its character