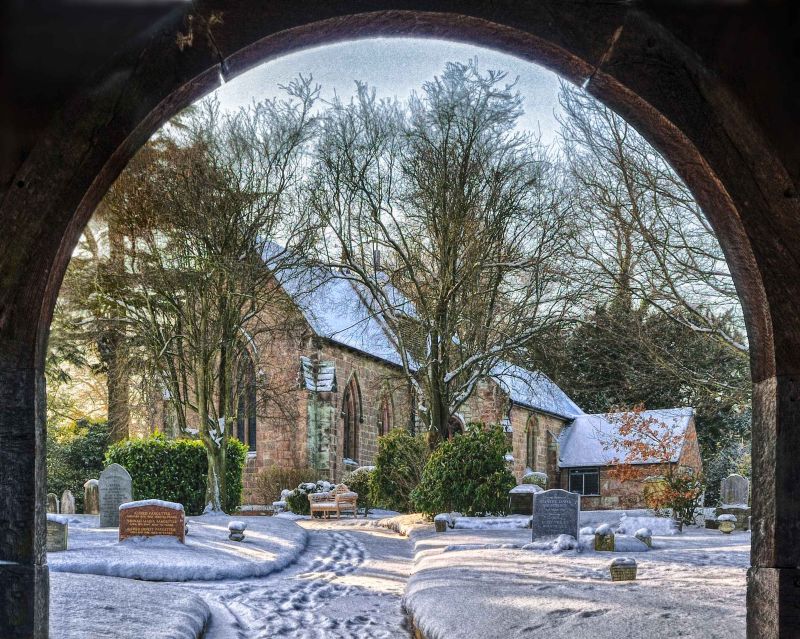 CORLEY TAMWORTH ROAD
SP3085 (South side)
20/8 Church of St. Mary
08/09/61
GV II*
Parish church. Early and late C12 nave. Early C13 chancel. North aisle rebuilt
C14-C15. Restoration of 1893. Coursed sandstone rubble squared and irregular
coursed sandstone. Plain-tiled roof with 1893 louvred bell turret with a hipped
roof, plain-tiled. Plan of nave with north aisle and chancel. Nave: early C12.
West wall and part of south wall restored. West wall has round window above 3
coupled round headed window of 1893. 2 windows to south wall, west end are
similar and of 1893. 2 other windows are early C12, restored. The south doorway
is C12. Round headed arch of one hollow and one roll moulding on engaged shafts
with moulded bases and spiral volutes to the capitals. The chancel is c.1300.
North and south walls each have 2 windows of 2 lights with Y-tracery. At the
north-east and south-east angles of the chancel are angle buttresses of 2 stages
with gables. North aisle rebuilt C14-C15. 2-light, cinquefoil windows in
4-centred arches. Interior: Aisleless early C12 nave with rere arches of windows
having a roll moulding. North arcade, late C12. 2 bays. Round headed arches,
unmoulded, on piers with round capitals decorated by scallops with various leaf
and other enrichments. The large head carved on the easternmost respond is
later. C19 roof, boarded. Chancel arch, early C12. Round headed arch of 2
unmoulded orders, the inner on respond with square capital having splayed lower
edge. Piscina with trefoil cusping to the head. Font: Stone, circular on stem.
The bowl inscribed with initials and the date 1661. Wall monument in north
aisle, early C18. Black marble with white marble open pediment with shield of
arms above tablet, also of white marble.