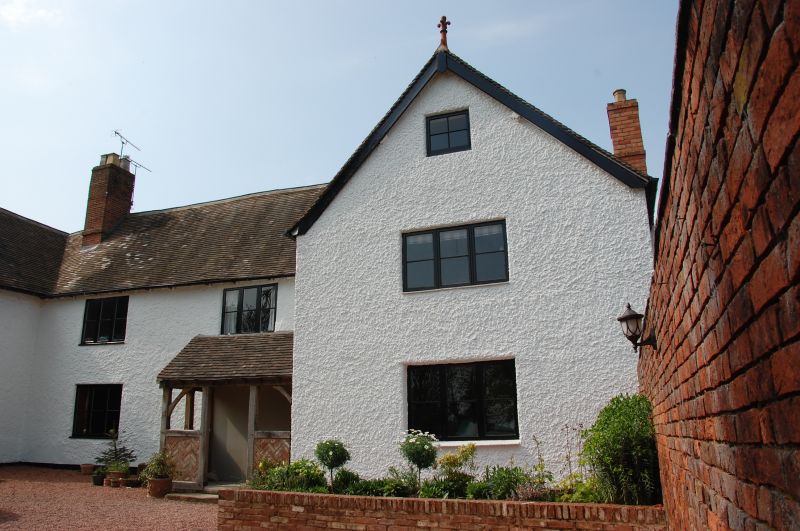 CORLEY ROCK LANE
SP3085 (West side)
20/5 Corley Hall and attached wall
11/11/52 and gatepiers
- II*
House. Early Clb with C17 and later additions and alterations. Timber-frame
covered with roughcast render. Plain-tile roof and brick stacks. H-plan with
gabled cross-wing: C17 extension at rear of NE cross-wing. 2 storeys and attic.
Entrance doorway to cross-passage under a plain rendered porch set in the angle
of the main range with the NE cross-wing: C20 door. Late C19 3-light casement
windows to both floors of main range on left of porch and one similar to each
floor of gable wall of NE cross-wing. Late C19 canted bay window to gable wall
of SW cross-wing. On NE side of NE cross-wing an early C16 oak 4-centred arched
doorhead. Interior: moulded bridging beams, some on carved brackets, over ground
floor; chamfered bridging beams on first floor. Room on ground floor in SW
cross-wing has a mid to late C16 fireplace wood surround with carved side
pilasters and arches carved with foliage. Above a bracketed cornice 3 panels
carved with serpentine monsters. Window casement in the same room contains
stained glass panel with royal arms: late C17 or early C18. Late C17 staircase:
square newel posts with turned knobs, turned balusters. In a first floor room
some late C16 or early C17 panelling: Square fielded panels except for frieze of
top panels which contain a set of early C16 carvings, possibly brought in; 8 are
carved with heads which may be portraits, 6 are smaller heads in medallions and
3 are conventional heads and a cherub with a scroll. Other rooms have C18
panelling, doors, and a C16 door with original strap hinges. Several bays of
roof have cambered collar ties and windbraced purlins. Adjoining front courtyard
with C18 red brick gatepiers with moulded stone cornice which support stone
pedestals surmounted by carved griffins or wolves heads.
(VCH: Warwickshire: Vol IV, p58; Buildings of England: Warwickshire, p243)