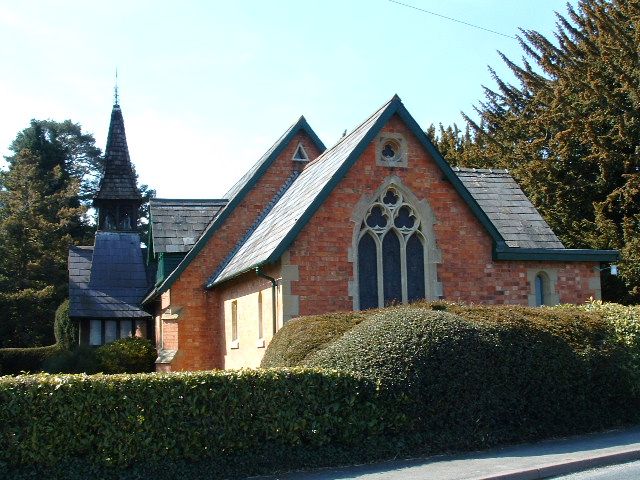 RUSHWICK CP A 44
SO 85 SW
Crown East
3/123 Church of St Thomas
- II
Church. Circa 1880. Brick with limestone dressings and slate roof.
Comprises a nave, south porch with bell turret, lower chancel, and north
vestry. Windows have flat heads. West window is of four pointed lights
with engaged shafts. On the north side of the nave are three narrow
single-light windows with shouldered, cinquefoiled, and ogee heads. The
south wall has two windows of two lights. The right-hand one has trefoiled
lights, the left-hand one shouldered lights. Between them is a porch of
timber on a brick and stone base. It has an outer pointed arch formed by
timber braces, a cambered tie-beam, and a boarded king-post truss. The
bellcote is of square plan and is slated below the bell openings, which
are of timber with tracery decoration. Above is a steeply-pitched shingled
roof with iron finial. To the right of the porch is a timber dormer window
with carved bargeboards and four trefoiled lights. In the south wall of the
chancel are two one-light windows, with shouldered and trefoiled heads. The
east window has a pointed head with Geometrical tracery and is of three
pointed lights. Interior: nave roof has scissor-braced rafters and trusses
with arch-braced collars and V-struts. The chancel arch is pointed and
chamfered. The font, said to be found in a farmyard on the site of the
Church of St Cuthbert at Lower Wick, appears to be C12. It is partly restored
and is carved with figures within a continuous arcade of round arches with
chevron decoration separated by pilasters.