A Grade I Listed Building in Pembridge, County of Herefordshire 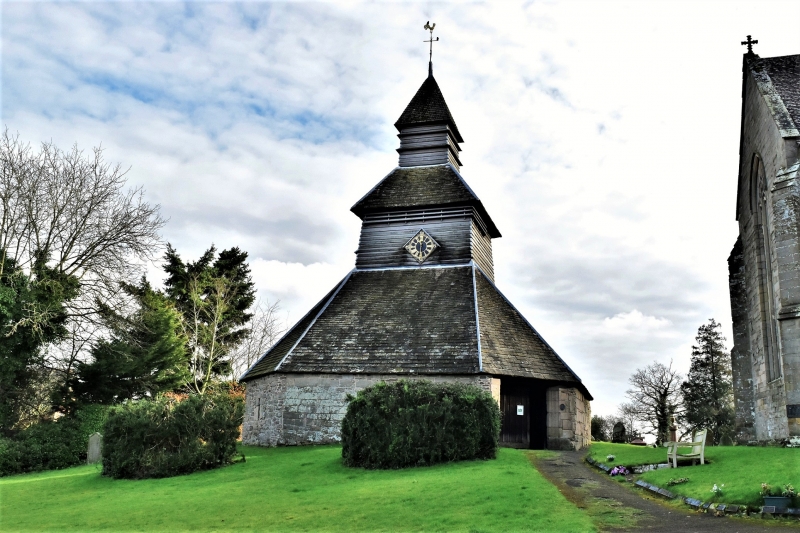 Detached belfry. Early C13 origins, reconstructed during C15 - C16 when
ambulatory was added and internal structure altered and further remodelled
during C17 with addition of the spire. Restorations of 1898, 1950 and 198:2-3.
by Leonard Baart Associates. Timber-framed structure with later added sand-
stone rubble wall to the lower stage, weatherboard cladding; lower hipped and
and upper pyramidal roof covered with stone slates, shingle to spire. Square
tower with later octagonal plan wall enclosing an ambulatory to the ground
stage; entrance to south-west. Three diminishing,stages, final stage forming
spire; clock faces to west and north and loop vents to three sides with a pair
of similar openings to east side. Broad doorway with triple moulding to jambs
and wooden lintel. Interior reveals timber-framed structure of tower; four
massive corner posts survive from the earlier structure with mortices signify-
ing the position of the former internal structure of the bracing. Present
bracing probably dates from the C15 or C16 and has small horizontal and
vertical members with diagonal struts. There are also further reinforcing
braces that have been added at a later date and during periods of restoration.
(RCHM, Vol III, p 161; BoE, p 267).