A Grade II Listed Building in Blakemere, County of Herefordshire 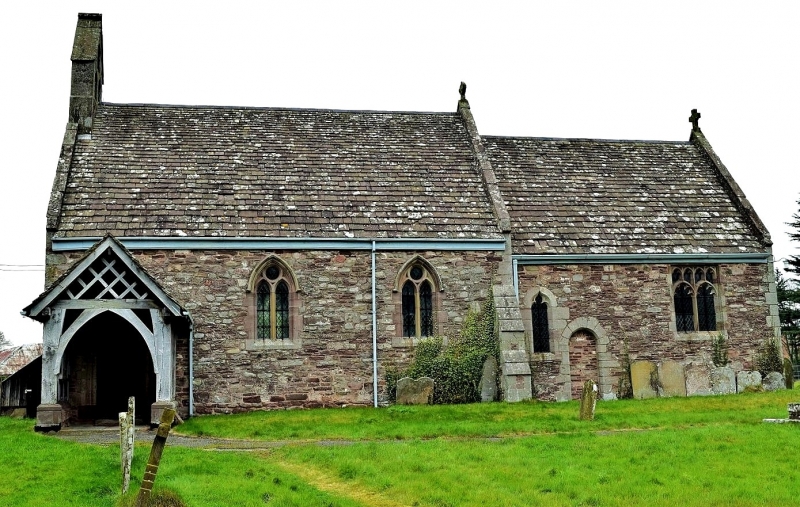 Parish church. 1877 by G Truefitt incorporating medieval material. Coursed
rubble with ashlar dressings and graduated slate roof. Nave, with south
porch and chancel. Nave of three bays, to west the south door which is C12
with a semi-circular head of two orders, the inner moulded and the outer
chamfered with a moulded label. The two windows are each of two trefoiled
lights under a two-centred arch with moulded label. North wall has two
similar windows and a blocked C14 north door with chamfered jambs and a
segmental pointed head. West window of two cinquefoiled lights under a
square head. Bellcote to gable above contains three bells. Chancel has
two windows in south wall, the western window of one ogee trefoiled light,
the eastern of two cinquefoiled lights with tracery in the square head.
North wall has two lancets, that to the east with a semi-circular head, to
west with a pointed head. East window has three trefoiled lancets. Roof
of nave of three bays, with arch-braced collar trusses, chancel roof of
two bays. Interior: the C12 chancel arch is two-centred and of two orders
with a moulded label, the outer order chamfered and continuous, the inner
order springs from corbels with short shafts. In the north wall of chancel
a small C14 tomb recess with moulded two-centred arch and label. Fittings:
font has a C12 bowl with cable moulding to neck, stem C19. Communion rail
C17 with turned balusters. Pulpit made up of C17 woodwork, including similar
balusters and enriched panels. (RCHM, Vol 1, pp 23-4; BoE, p 76).