A Grade II* Listed Building in Ledbury, County of Herefordshire 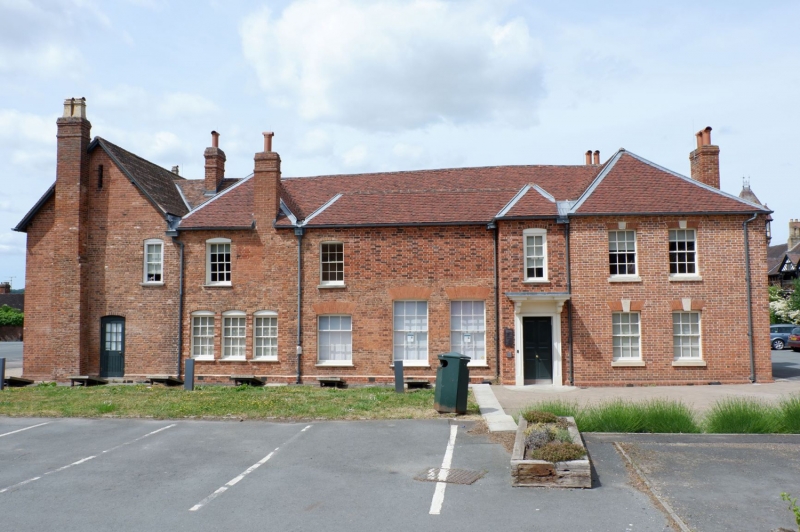 
Master's House situated behind the Hospital. Early C15 with later alterations and additions. The south façade is of red brick, some painted with a plain tile roof, part gabled and part hipped with a tall corniced ridge and lateral stacks. On the north side the building is principally timber-framed, mostly with later painted brick nogging, interspersed with some later brick sections. The building comprises an irregular and asymmetrical complex of wings with the main wings oriented north/south and east/west with the eastern side fronting onto the High Street. The early C15 Master's House is now encased on almost all sides with later additions and extensions which have developed over several centuries of occupation. The House comprises a central single storey hall, originally open to the roof but with later floor inserted. Two storeyed cross-wings at either end formerly served as the upper and lower ends housing the solar to the west and the buttery and pantry to the east. Four oriels were incorporated within each re-entrant angle between the hall and crosswings, two of which survive substantially intact. It has been suggested that these may have provided stair access to the upper floors of the cross wings. The principle, south façade of the hall was originally close studded with square framing found elsewhere although this framing has been masked by later re-facing and extension.

The present entrance is on the east side through a post medieval part of the building. The slightly projecting bay to the southeast corner represents the eastern cross-wing of the early hall complex. The southern facade is an asymmetrical range of mostly 12-pane sash windows with segmental-arched heads, those to the right with rubbed brick voussoirs, some with keystones. This largely C18 facing has taken the place of the original timber-framed hall but evidence of the former bays can be seen in offsets and rooflines. At the southwest corner is a full height external stack relating to the C19 wing. The western elevation, the main frontage of the C19 wing, has a range of 2-pane sashes with a further lateral stack and a later porch. The northern elevation comprises the projecting gable end of the C19 wing with two 16-pane sashes and a set back to the timber framed wall of the original hall. Bordering this central range to the east is a deep wing with a brick section joining the main timber-framed hall range to an originally separate timber-framed building believed to be a detached kitchen. This is mainly box framed with painted brick infill panels and a very large lateral brick stack.

The interior has been reordered to provide first domestic accommodation and then latterly offices. A large open-well staircase with a wreathed handrail is located in the large hall behind the north entrance door and probably dates to the C18 alterations. It is clear that much of the earlier timber-framing survives beneath later decoration and partitioning and is visible both under later wall paper and projecting from walls and ceilings. On the ground floor of the western cross-wing is a former dining room lined with dark timber wainscoting topped by an enriched timber frieze and incorporating an overmantle with Ionic pilasters and moulded blind arcading with a date of 1588. It is clear that this has been reset in its present position.

The greatest significance of the building, however, is in the roof structure which allows the interpretation of the earliest development of the building. The hall was formerly open to the roof which survives virtually intact. It is of 4 bays, the middle of which lie over the body of the hall and separated by an arch-braced truss. The outer trusses have queen struts and a collar. The trusses incorporated tie beams with that at the west richly moulded on the upper 'dais' side. At the eastern low end of the hall a spere truss marks the separation of the hall from the bay of the screen's passage. There are two tiers of purlins and a ridge-piece with wind braces to the lower part.

The west end cross-wing is a 3-bay timber-framed structure of two storeys and part attic. The eastern cross-wing is structurally similar, although slightly shorter, with an arch-braced truss in the southern bays of the roof with simpler roof trusses to the north suggesting that there was a high status first floor room to the south open to the roof with a room of lesser status to the north. The ground floor almost certainly accommodated the buttery and pantry beyond the screens passage.

Four oriels, two of which survive, were built into the re-entrant angles between the central hall and projecting wings and are a notable feature. It has been suggested that these may have contained stairs or garderobes. To the north, now part of the complex but originally separate is a detached wing thought be to a kitchen.

The Master's House is a rare and almost unique example of a building type which was once commonly associated with hospital and infirmary sites. It is particularly notable for its early C15 date and the degree of survival despite later alterations and extensions.