A Grade I Listed Building in Westhide, Hereford, County of Herefordshire 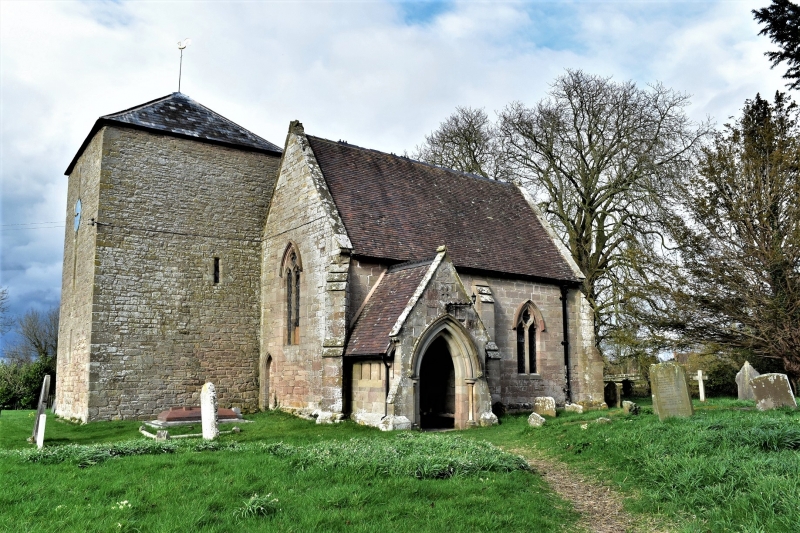 INTERIOR: the two bays of nave are separated from south
aisle by one C14 octagonal column supporting two 2-centred arches similar
to off-centre chancel arch; tower arch late C12 or early C13, 2-centred
with trumpet capitals. Nave roof, formerly ceiled, is supported by
brattished wall plate on north side and trussed collar beams probably
C14 or C15, some of which have been restored. Late C19 waggon roof to
south aisle and chancel. Chancel: two C14 re-set corbels with heads of
man, to north side, and a woman, to south, of east wall. Two c1900
hinged candle brackets, one each to north and south walls are made of
wrought iron with initials SB and five detachable brass sconces to either
side. Nave: mid-C19 pulpit, rectangular in plan with Romanesque style capitals
and marble columns to west and marble bas-relief of St Bartholomew set in
recess on south side; a dwarf wall to south of chancel arch, in some
stonework supports a pine lectern. South aisle: font, probably C13, with round
bowl on columnar shaft. Soffit of east window has C14 ox-blood coloured
scrolls. Similar paint to arch over recess in south wall containing
recumbent male, C14 effigy with feet resting on a dog and to corbel
heads of a bishop and a queen to either side of east window. C14 piscina
on south wall: trefoiled head and foiled drain with two sockets angled
inwards from east jamb. Beneath is a C17 slab resting on its side with
two effigies of a woman and a man in armour, both decapitated. Attached to
the west wall an inscribed alabaster slab of Richard Monyngton died 1524,
and his wife Alice. He is dressed in armour; beneath are 16 weepers:
eight sons and eight daughters.