Church of St Michael and All Angels, Including the Detached Bell Tower

A Grade I Listed Building in Ledbury, County of Herefordshire 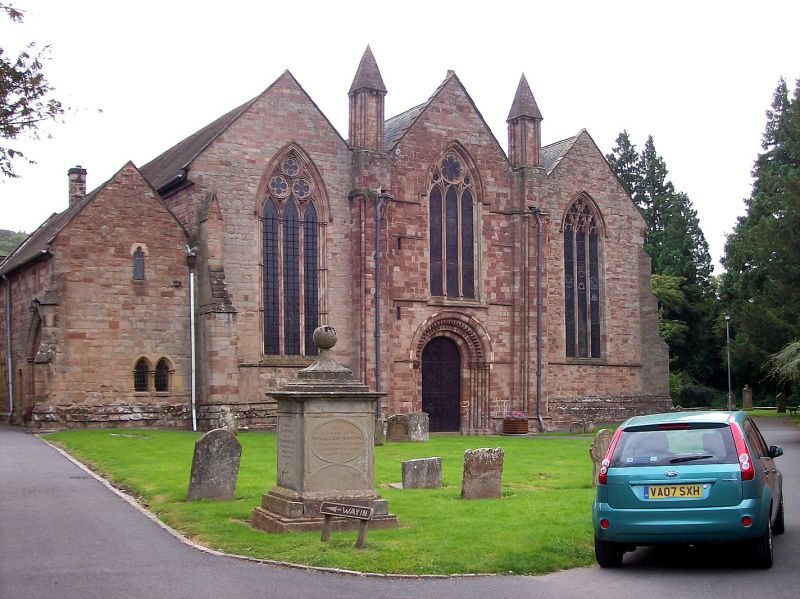 Entry Name: Church of St Michael and All Angels, Including the Detached Bell Tower

CHURCH OF ST MICHAEL AND ALL ANGELS, INCLUDING THE DETACHED BELL TOWER

EXTERIOR & INTERIOR: Norman remains include the centre of the west front and the door surround which has chevrons both to the outer face and intrados of the relieving arch which meet at right angles. There are three shafts to each side with carved capitals including masks which bite the shafts. At the west end of the north arcade, the nave includes the bases of four large round pillars [c.5 feet in diameter] which appear to date from an early Norman building. The choir has similar columns to full height with scalloped heads and above are circular windows, once forming a clerestory above low side aisles, but now giving onto the heightened aisles. Above them there is a corbel table which once formed part of the exterior. The chancel arch has capitals which show the height of the springing of the former aisle arches. To the far, east end of the chancel are two round-headed lateral windows. The north aisle is C13 with Geometrical windows to the east and west ends which have quatrefoils in circles and the north windows are 3 stepped lancet lights. The south aisle is all of the C14 including the nave arcade which has octagonal columns with concave faces. The tracery is of intersecting Y-shapes with cusps. The north chapel [now called the Chapter House, formerly the Chapel of St. Katherine] is of c.1320 and has large 4-light windows with complex tracery which indicates the transition from Decorated to Perpendicular. Attached to the tracery are numerous small ball flowers of the type seen at Leominster and this would appear to be the work of the same craftsmen, but slightly later. The chancel has an Easter sepulchre and aumbries and piscina. The separate tower is of c.1230 to its lowest three stages with rubble walls and ashlar to the broad angle buttresses. There are lancets to the lower stages and a trio of lancets spanning the third stage with louvres to the central opening on each side. Above this Nathaniel Wilkinson of Worcester added a further stage with a single, cusped, louvred light to each side, a deep cornice and battlements behind which a slender octagonal stone spire rises with bead mouldings to the corners and flush lucarnes to the alternating faces. Many of the monuments of all periods are of good, and occasionally exceptional quality. They include a C13 effigy of a Benedictine monk, which was originally a coffin lid and now stands upright in the north chapel; a C14 altar tomb to a female member of the Carew family whose sculpted dress falls naturalistically over the edge of the tomb; the canopied monument to Edward and Elizabeth Skynner of 1630; Daniel Ellis Saunders, d.1825 by Westmacott; Wiliam Miles, d.1803 by Flaxman and Robert Middleton Biddulph, d.1814, also by Westmacott. The west end of the south aisle is railed off to form a chapel with reclining monuments to Anthony Biddulph, d.1718 and his wife Constance, d.1706.

SUMMARY OF IMPORTANCE: The Church of St Michael and All Angels, Ledbury is one of the finest churches in Herefordshire, originating in the C12 it retains much early fabric. Later building campaigns, principally in the C13 and C14 are of similar quality and the richness of the architectural detail throughout is noteworthy. The church also retains a distinguished series of monuments. Given its date and the particularly good survival of early fabric as well as the richness of its architectural detailing, the Church of St Michael and All Angels certainly deserves re-grading at grade I.