A Grade II* Listed Building in Llandinabo, County of Herefordshire 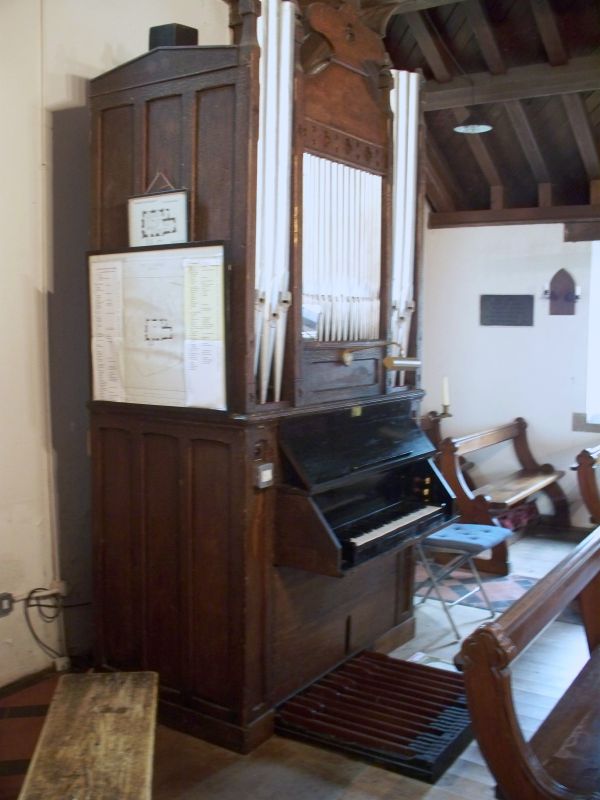 Parish church. Medieval but almost entirely rebuilt by A Lloyd Oswell,
c1881. Coursed sandstone, rock faced sandstone and sandstone dressings,
timber-framed bell-turret and tiled roofs. Two-bay nave, two-bay choir,
north aisle, north vestry and south porch. West end of nave has a lancet
between a pair of weathered buttresses which support the west side of the
bell-turret; west window of north aisle is trefoil-headed, a catslide roof
covers the north aisle which has on its north side three buttresses with
two groups of three lancets between them and door to vestry towards the
left; the east end of the north aisle has a pair of lancets. The east
window of the chancel has 3 lights under a 2-centred head and label; the
south window is a lancet. The south side of the nave has a 2-light window
with Y-tracery to the right and a lancet to the left; further to the left
is the pine south porch. The south doorway has a chamfered 2-centred head.
Interior has largely medieval nave and chancel roofs, the first a wagon
roof with raking struts above the collars, the second with braced collars.
C16 screen between chancel and nave has three bays either side of central
entry, grotesque cornice band of dolphins, and a "Renaissance" head in
a roundel between two mermaids. The north aisle is separated from the
nave by two bays divided by an octagonal oak pier. Chancel has a wall
brass to Thomas Tompkins, drowned 1629 and a Kempe east window. C13 font,
with octagonal bowl and stem on late C19 base. Pulpit incorporates two
panels of early C17 round-arch design. Late C19 organ in nave carries
Lloyd Oswell accommodation plan dated 1881. (RCHM Vol I, p 166).