A Grade I Listed Building in Newbiggin by the Sea, Northumberland 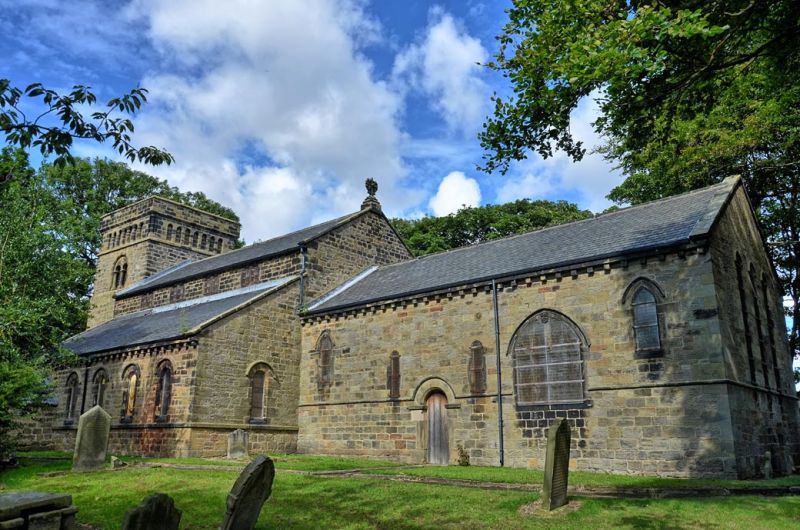 Civil Parish: Newbiggin by the Sea

South aisle has porch with boarded double doors in round arch, with 1818 sundial
above, under coped gable with roll-moulded finial; 4 round-arched windows with
hoodmoulds to east of porch, similar windows in each end of aisle. North aisle
shows similar fenestration. Clerestorey with 4 pairs of round-arched lights on
each side; coped east gable with elaborate cross fleury finial. West tower
shows low stepped diagonal buttresses and slightly-projecting stair turret with
small loops. West window of 2 trefoil-headed lights, with shields of Ogle and
Widdrington under square head, is probably 1843 copy of C15 original; above
window a built-in small effigy, perhaps of a priest. Set-back bell stage with
large 2-light openings and heavy parapet with blind arcade and shafts at angles.

Interior: internal tower walls of long roughly-shaped blocks in irregular
courses. Round arch of 2 square orders to tower, on restored chamfered imposts;
square-headed doorway to tower stair on south, and blocked square-headed opening
above. Tower stair of unusual square plan. Western bays of north arcade have
round arches of a single square order with a chamfered hoodmould, on squat
round piers with scallop capitals; taller eastern arch has filleted roll
mouldings towards nave, on triple-shafted respond with still-leaf foliage and
mask corbel. Western bays of south arcade have round arches of 2 square orders
with a chamfered hoodmould, on round piers with re-cut capitals and bases with
nail-head; tall double-chamfered eastern arch with broach stops and moulded
hood. The western arch of each arcade cuts into a single-splayed Pre-Conquest
window; the monolithic pseudo-arched head of that on the south has decoration
of incised concentric circles. Double-chamfered chancel arch on twin-shafted
corbel responds, the northern partly cut away.

Woodhorn may be the 'Wudecestre' (Woodchester) granted to the Lindisfarne
community by Ceolwulf in 737.