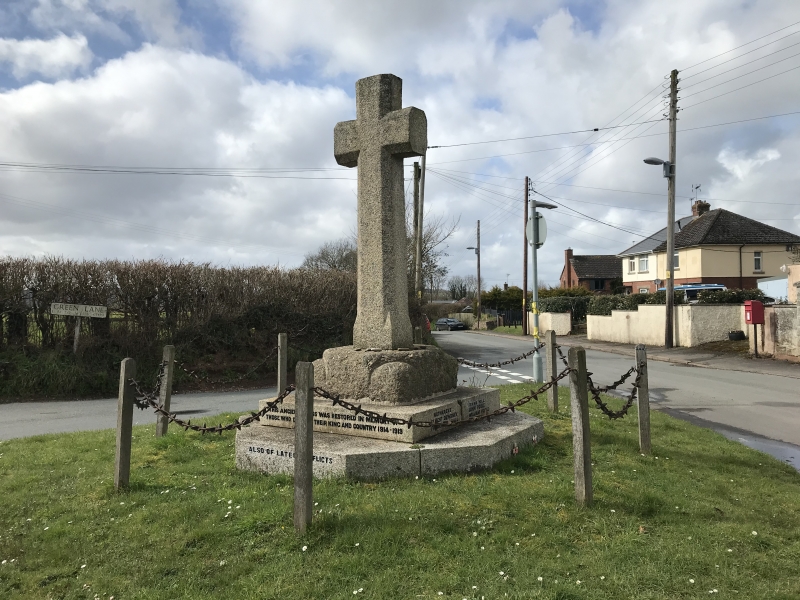 DESCRIPTION: Rewe and Netherexe War Memorial stands on a small triangular traffic island surrounded by a timber post and linked chain boundary at Rewe crossroads, where Green Lane meets the A396, and incorporates the single-stone base of a medieval cross.

The memorial comprises an early C20 granite cross inserted into the socketed base of a former medieval cross, which in turn stands on an early C20 two-stage granite plinth; the bottom step is octagonal in plan and the upper step, carrying the war memorial inscriptions, is square.

The medieval socketed stone is square at its base with corner shoulders, above which it is octagonal. The cross shaft rises from the medieval stone to the cross head, being rectangular at its base with pointed stops, above which the angles are chamfered. The cross shaft is slightly tapered and the cross arms are chamfered and slightly splayed. The top arm of the cross is longer than its side arms.

The memorial inscriptions are located on the upper step of the plinth and read (front) THIS ANCIENT CROSS WAS RESTORED IN MEMORY OF / THOSE WHO DIED FOR THEIR KING AND COUNTRY 1914-1919.// (to the right) NETHEREXE/ (NAMES). // (back) THANKS BE TO GOD WHICH GIVETH US THE VICTORY / THROUGH OUR LORD JESUS CHRIST. // (to the left) REWE/ (NAMES).

Rewe and Netherexe War Memorial incorporates the socketed single-stone base of a medieval wayside cross, thought to date to the C15, which once stood on or near the present site of the memorial at Rewe crossroads.

By the production of the 1889/90 and 1889/1912 OS maps it would appear that the condition of the medieval cross was at best fragmentary, being marked thereon, in the same location, as 'Stone Cross (remains of)'. This is supported by an illustration published in 1893 (Chudleigh) which shows the medieval cross before its later restoration as a First World War memorial, comprising then of the socket stone, supporting the badly damaged stump of a cross shaft (shaft now lost), the latter being square at the base and chamfered above, which is similar to the existing memorial's shaft. The 1951 OS map shows a cross in this location and the memorial is clearly shown on an aerial photograph, dated 1947.

The aftermath of the First World War saw the biggest single wave of public commemoration ever with tens of thousands of memorials erected across England. This was the result of both the huge impact on communities of the loss of three quarters of a million British lives, and also the official policy of not repatriating the dead which meant that the memorials provided the main focus of the grief felt at this great loss. As such, the decision was taken to restore the medieval wayside cross as a war memorial and permanent testament to the sacrifice made by the nine members of Rewe and Netherexe who lost their lives in the First World War.

The restored cross, having cost £116, was unveiled in January 1921 by Viscount Hambleden, with local press at the time confirming 'the cross has an entirely new shaft and a new under-base, but the original [medieval] granite base is retained' (Exeter and Plymouth Gazette - Tuesday 25 January 1921, pp5).

Rewe and Netherexe War Memorial, incorporating a medieval cross base, which stands at the junction of Green Lane with the A396, Rewe, is listed at Grade II for the following principal reasons:
* Historic interest: as an eloquent witness to the tragic impact of world events on this local community, and the sacrifice it has made in the First World War, incorporating the socketed base of a medieval cross which once stood nearby;
* Architectural interest: as an accomplished and well-realised stone war memorial, in the manner of a medieval wayside cross, based on and incorporating medieval material found locally, and sensitively adapted for its inclusion in a First World War memorial.