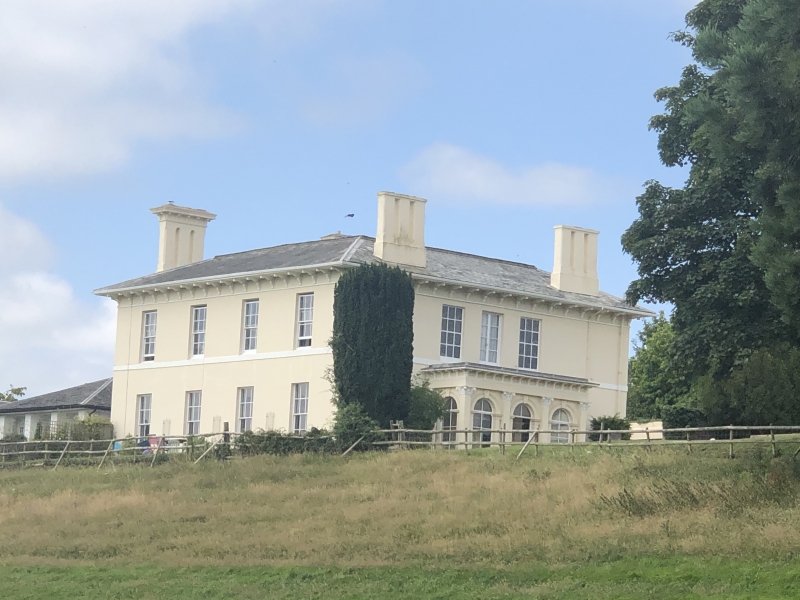 House, formerly the Rectory. 1840 by I K Brunel. Stone, stuccoed, under hipped slate
roof with lead hips. Central staircase plan. 2 storeys. Front: 3 central bays
placed close together in the centre, with wide side bays left blank, except for plat-
band around whole. Central porch set directly below 3 windows, the central one a pair
of 4 pane casements, the others blocked but all barred, the middle window of 2 lights,
4 panes per light. Porch itself on base of 2 stone steps with cornice with frieze of
brackets supported by composite columns, 3 bays, and one to each end, each bay with
round-headed arch with keystone on detached pilasters. Roof with overhanging eaves
supported by shaped brackets; 2 large triple chimney stacks coupled and chamfered,
wanting their moulded caps, which survive for the rear pair. Side elevations of 4
bays, sash windows, 4 panes per sash, with moulded architraves. The ground floor
windows extend to plinth level. A terrace to the side elevation may be a later
addition. Partially dismantled service courtyard to right. Stables to rear, stone
under hipped slate roof; wagon entrance; C19 timber shutters to most openings.
Interior: the entrance hall is the most important room; entrance itself with 3 round-
headed arches with paired pilasters; 3 arches at foot of timber mock-cantilever stairs
with stick balusters; doors with recessed panelled architrave and Greek pediments
with little friezes of free-standing balusters; all timber. Panelled dado; fireplace
removed. Historical note: the Rectory was built by the Bristol and Exeter Railwaywhich
required the demolition of the Old Rectory. The plans were drawn up in Brunel's
office.