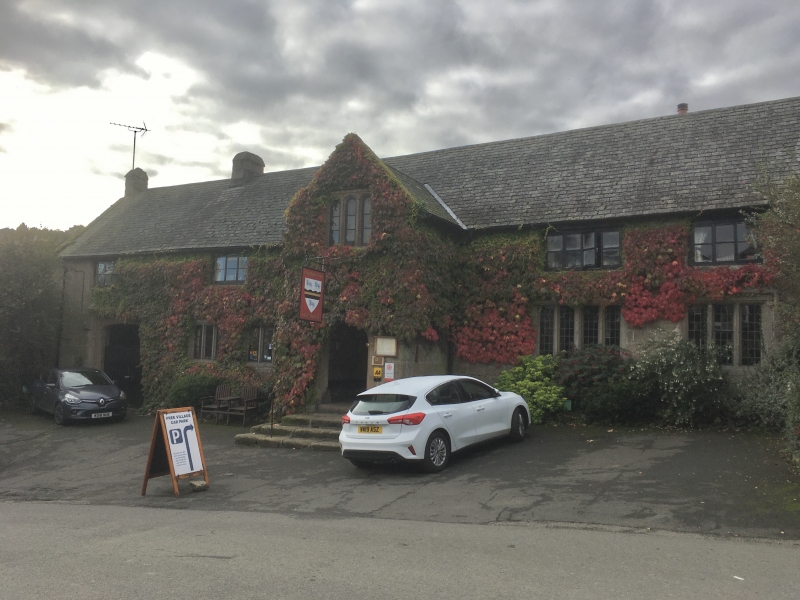 Inn, former manor house and home of Burgoyne family. Late C16 - early C17, maybe
earlier in parts; C18, C19 and C20 modernisations. Mostly large blocks of coursed
granite ashlar, more granite rubble to rear; granite stacks with granite ashlar
chimneyshafts; slate roof, formerly thatch.
Plan and development: courtyard plan house. The main block, along the front, is
set back a little from the street and it faces north-east. It has a 2-room plan
with through passage between and a wide carriageway through the left (south-east)
end. The left room (now the bar) was probably a parlour and it has an end stack
backing onto the carriageway and the large alcove alongside once contained a newel
stair. The chamber over the carriageway has a gable-end stack. The right room (now
a lounge) has a rear lateral stack. There is now a small lobby between this room
and the passage. 2-storey front porch.
Original kitchen (now the dining room) is in a rear block projecting at right angles
behind the hall and has an enormous stack backing onto the hall fireplace. Former
hall and kitchen are connected by a narrow corridor alongside the stack. Original
wing with end stack projecting at right angles to rear of front parlour. The
precise development of the rear is difficult to work out because of several
modernisations here in the C19 and C20. The space between the 2 rear wings appears
to have been filled quite early (probably in the C17). The passage was extended
back and now this part contains the main stair. The parlour wing has been extended
back in more than one building phase, (it now contains the kitchen). Rear courtyard
has been covered in the C20 and there are C20 service buildings across the rear. 2
storeys throughout.
Exterior: good regular but not symmetrical 3:1:2 - window front. The gabled porch
to the passage front doorway has a 2-centred outer arch of moulded granite on top of
a flight of granite steps. The porch has a barrel vaulted ceiling with narrow
granite ribs springing from corbels and has slit windows each side. Above the outer
arch is a 3-light granite-mullioned window with elliptical headed lights, sunken
spandrels and hoodmould. Each side of the porch are 2 granite-mullioned windows
with hoodmoulds, those to right (the hall) a little taller than those to the left
(the front parlour). 3 of these are 3-light and one of the hall windows is 4 lights
and all contain rectangular panes of leaded glass. All the first floor windows and
a small ground floor window immediately left of the porch are C20 casements without
glazing bars. At the left end is the very fine carriageway; a wide Tudor arch with
moulded surround, sunken spandrels and a hoodmould with the initials B and W carved
on the labels. The roof is gable-ended. Rear has mostly C20 casements but the rear
parlour has an original 4-light granite-mullioned window with hoodmould.
Good Interior: the original carpentry detail is relatively plain. All the rooms
have large soffit-chamfered beams, only the one in the rear parlour has step-stops.
The hall has a large granite ashlar fireplace with hollow-chamfered surround a
smaller version above once served the chamber but is now in a-corridor. The kitchen
behind an enormous fireplace with a soffit-chamfered oak lintel. The front parlour
fireplace is blocked by a C20 grate. The rear parlour stack has been rebuilt. It
is not even clear whether the ground floor had a fireplace but the chamber above has
a partly rebuilt hooded fireplace. There are several C16 and C17 doorframes around
the place, notably a round-headed one to rear of the front passage and it contains
an old studded plank door. Others are Tudor arches. Also some old studded panelled
oak doors. Kitchen wing roof is carried on a side-pegged jointed cruck truss but
the rest of the roof was replaced probably in the C18 by A-frame trusses with pegged
and spiked lap-jointed collars. One of tile most interesting features in the house
is an enormous upright slab of granite built into tile inner
wall of the rear parlour. This looks very much like a prehistoric standing stone
and it seems that the house was built around it. Present main stairs are late C19.
The Oxenham Arms has one of the most attractive facades of any building of its
period in Devon. South Zeal is also one of the few medieval boroughs in Devon where
many of its C16 and C17 houses still survive.