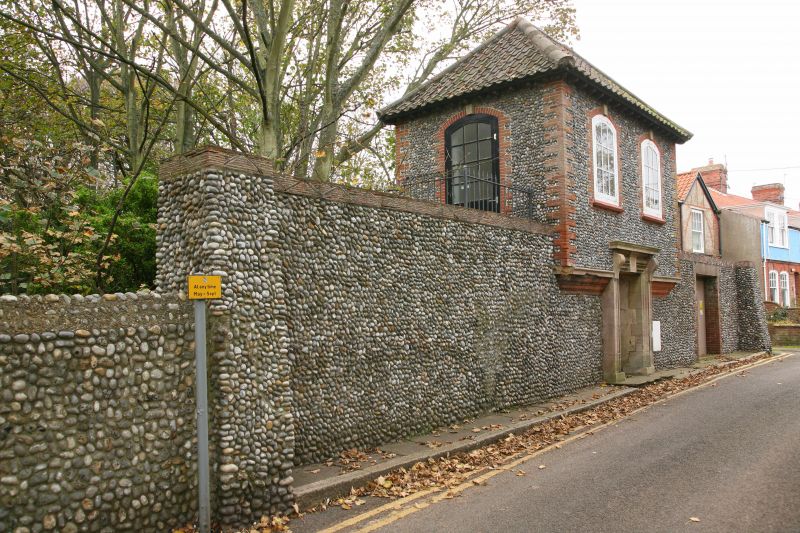 Entry Name: Gazebo at the Pleasaunce

GV II*
Gazebo. c.1900. By Sir Edwin Lutyens for Lord and Lady Battersea. Flint with stone and brick dressings. Hipped pantile roof. Rectangular in plan, with a section of high wall to either side ending in a battered pier. 2 storeys. To the road a fine central stone doorway with plain cornice on consoles; above are 2 sash-like windows with glazing bars with segmental arched heads; brick dressings. To the rear (garden side) a central stone doorway with plain cornice; to the first floor an elaborate concave brick roundel flanked by brick-dressed slit lights. An external stone flight of steps to the right gives access to the first floor. To the right hand gable wall, upper floor, is a bull's-eye window with brick and stone dressings.

INTERIOR:
This is a highly sophisticated essay in the Early Renaissance style where the single space is like a miniature chapel with a pair of adjoining domed squares each with shallow arched embrasures to either side and with the end having a rose window.

HISTORY:
This group of buildings is a very significant seaside home built from 1897 onwards by Lord and Lady Battersea and designed by one of the most important of all British architects, Sir Edwin Lutyens. It follows the development of Cromer, which is only a couple of miles away, as a very fashionable seaside resort in the 1880s and the building of large houses by well-to-do families relishing the bracing air. However, The Pleasaunce is almost certainly the largest: its original name 'The Cottage' was probably for the original house incorporated in the core of the new one. It might have been a joke (the house has some 35 bedrooms), except for what it could be compared with, since Lady Battersea was the eldest daughter of Sir Anthony de Rothschild, of Aston Clinton, Bucks, niece of Mayer Rothschild of Mentmore, and Lionel, the first Jewish MP and granddaughter of Nathaniel Mayer Rothschild, the founder of the London branch of the great banking house. She was thus a cousin of Baron Ferdinand de Rothschild, the builder of Waddesdon. Waddesdon was being completed in 1888 at the same time as the Batterseas bought the couple of original villas, linked to form one home. Set alongside Waddesdon and other Rothschild properties, The Pleasuance is perhaps a cottage in comparison.

Cyril Flower, created Lord Battersea in 1892, was the son of a wealthy business man with multiple shops in Battersea, a Liberal M.P. and Chief Whip in Gladstone's 1886 Government. Both he and his wife had artistic interests. Indeed Lady Battersea was interested in architecture early on, as, near to her home, Aston Clinton is a former infants school, now listed, built as a present for her on her 16th birthday 'at her own request'. The quality of the Batterseas' pictures inherited by members of the Rothschild family testifies to these artistic interests since they included C16 Italian pictures and a Tiepolo, now at Ascott. The rest of the contents of the house took 12 days to sell in the 1930s after Lady Battersea's death.

However, this important commission, that Lutyens received early in his career, had an architectural sting in the tail because the couple insisted that the recently built villas set close together and united as one were not demolished for the new house but incorporated in it. Perhaps this quirky demand was something to do with their philanthropic interests and that they did not wish to be labelled as a couple so rich that they could pull down a couple of houses only a few years old. Whatever the reason, it may have given to Lutyens the concept of a large house evolved over several generations for, in addition to disguising the pre-existing, he added elements which are mid C17, late C17, and early C18 in style, both vernacular and polite, to achieve a very large rambling house which seems endless. Lutyens also built stables, cottages, an amazing open covered walk, a chapel-like place, for writing and contemplation looking out to the sea, for the poetess Emily Lawless, and a gateway in Moorish style, as well as other entrance gates and garden features. There are many imaginative ideas and, as the overall atmosphere is a wonderful seat of pleasure by the sea, The Pleasaunce is well named.

Whilst it may not have been of the grandeur of Waddesdon, visitors were of the grandest: Queen Alexandra and her sister, the Empress of Russia, made an unexpected visit in 1911 just driving over from Sandringham, much to the consternation of the staff. Indeed the Royal connection may have helped in getting the 27-year-old Lutyens the commission, for it was in the year of his marriage. His mother-in-law was a Lady-in-Waiting and the Batterseas had bought the house from Lord Suffield who was a friend of the Prince of Wales, later Edward VII. Lady Battersea and Queen Alexandra were probably friends long before 1911, and indeed in 1896 Lutyens had designed The Inn, Roseneath, Dunbartonshire for the sculptress Princess Louise, Duchess of Argyll, sister of the Prince of Wales.

Although the house was virtually complete by August 1898, Lutyens returned to make additions and alterations nearly every year from 1899-1909. Although the Batterseas were not easy clients and Lutyens wrote in 1899 that he was 'not at all proud of the Pleasaunce', this view is from his own perception of perfection.

The Batterseas extended the garden and lived on in the house until their deaths, Lord Battersea in 1907 and Lady Battersea in 1931. In 1936 the house was sold and became a Christian charity holiday home and it continues in this use with the house filled with visitors as was always intended. The beautifully tiled kitchens and service areas have still a suitably large batterie-de-cuisine constantly in use!

SUMMARY OF IMPORTANCE:
This gazebo cum gatehouse is of c.1900 and by Sir Edwin Lutyens. It is rectangular in plan and of 2 storeys and was built by Lord and Lady Battersea for a friend, the American poetess the Hon. Emily Lawless, as a writing room. This, it is said, was because she had the best inspiration when writing within sight of the sea. The exterior is a very carefully designed and crafted essay in the Neo Georgian style which combined the local materials of whole flints and brick and tile with the finest dressed stone doorways, worthy of city buildings. The effect is of outstanding elegance. This is also true of the highly sophisticated interior in the Early Renaissance style, where the single space is like a miniature chapel, with a pair of adjoining domed squares each with shallow arched embrasures to either side and with the end having a rose window.

Note. The gardens at The Pleasaunce are included in the English Heritage Register of Parks and Gardens at Grade II.