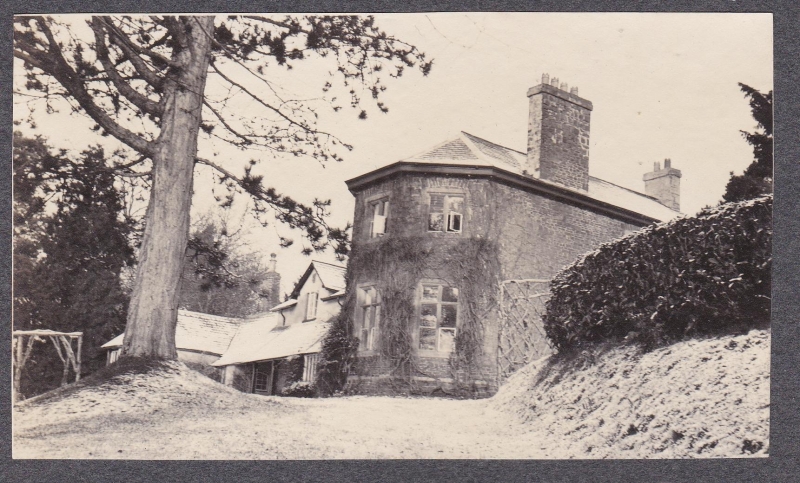 Former rectory. Early C16 origins, thoroughly rebuilt and extended in the early C19
and circa 1860. Colourwashed rendered stone rubble and cob, stone rubble wing; slate
and asbestos slate roofs; chimneys with brick stacks.
Plan: Extremely complex evolved plan. The present arrangement is a deep,
approximately rectangular plan with a C19 crosswing at the right balancing a single
storey front projection at the left. The early core of the house lies between, but
was probably originally roofed parallel with the crosswing and projection. The early
core may have been a 3 room and passage arrangement, although much obscured by
subsequent remodelling but an exceptionally fine hall or parlour of the early C16
survives to the front and a second room on the same axis is heated by a projecting
rear lateral stack. A later stack, heating the same room, appears to have been
inserted in the former passage, presumably when the lateral stack was temporarily
blocked. A third room on the same axis is unheated, it is not clear whether it
formed part of the C16 building or is a subsequent addition: it has a lean-to roof.
Later alterations are mostly Victorian: a lean-to added to the front of the early
range and extended beyond it as a single-storey projection with a rounded end. The
C19 crosswing has a polygonal end.
Exterior: Single-storey projection to the left, otherwise 2 storeys. Asymmetrical
1:2:1 window front, the single-storey projection to the left with a rounded end and
sash window with glazing bars. 2-leaf late C18/early C19 half-glazed door into
central block with Gothick glazing bars, 2 gables to the front of the central block.
The end of the righthand crosswing is polygonal with stone-framed mullioned windows.
Interior: The front left room of the main block has an outstanding high quality circa
1550 ceiling of intersecting moulded beams with carved foliage bosses at the
intersections. A moulded wallplate survives on 2 walls and carved half-bosses
support the beams at the walls. Good C18 Adam style chimneypiece with carvings of
corn on the jambs and delicate applied timber mouldings, presumably concealing a
larger, earlier fireplace. The room heated by the rear lateral stack has 2 open
fireplaces: the rear fireplace has a high oak lintel and evidence of a former bread
oven: the second fireplace, possibly introduced into the former passage, has a C19 or
C20 lintel and a brick-lined bread oven. A circa late C15 stone statue niche of
ecclesiastical origin with an angel corbel and carved canopy work has been introudced
into the stair hall.
Roof: Not inspected. Timbers said to be C19 or later.
The mid C16 ceiling is an outstanding and remarkable survival.