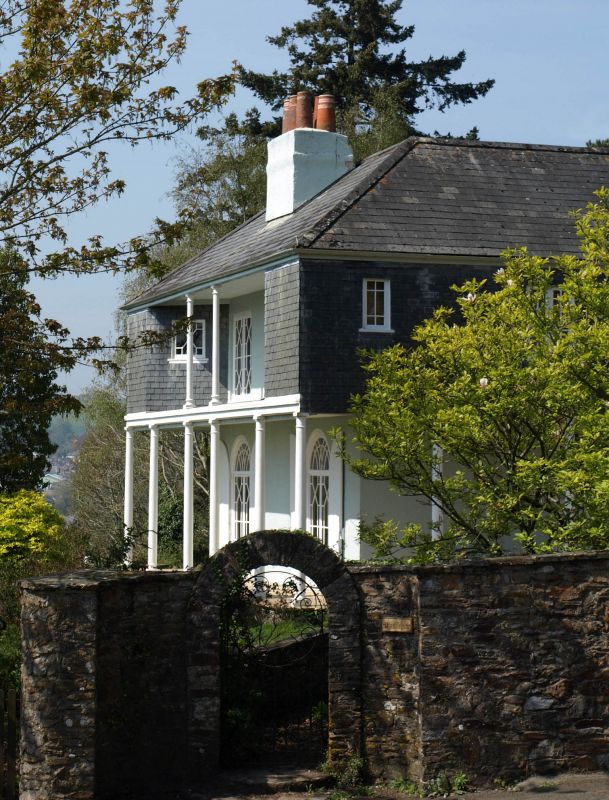 EXTERIOR: Front (north-east) elevation has a wide square-headed doorway with patterned fanlight and panelled door. At ground floor there is a verandah that wraps around the south-east and south-west fronts. Slender cast iron columns carry an overhanging first floor, which is slate-hung. There is a first-floor verandah between two projecting wing bays on the south-west front. Windows have distinctive Chinese-style Gothick glazing patterns reflecting ther late C18 fashion for Chinoiserie. There are round-arched French windows to ground floor with shutters. Small windows are set in the canted sides of the first floor wing bays.

HISTORY: Wrinklehorn (formerly known as Mount Dart) was originally named after its elevated location above the River Dart in the suburb of Bridgetown, to the east of Totnes. Along with the neighbouring village of Berry Pomeroy, Bridgetown was under ownership of the Duke of Somerset in the C19. The Duke built a Free Church at Bridgetown in 1835 to provide a chapel of ease for the growing population. By the late-C19 a number of large detached villas had been built in Bridgetown. Wrinklehorn is a modestly proportioned early-C19 villa. It appears on the Ordnance Survey Maps of 1889, 1905 and 1932 with its current footprint, with another cottage (now demolished) set close by to the east, which was formerly known as Wrinklehorn Cottage.

REASON FOR DESIGNATION: Wrinklehorn is designated at Grade II, for the following principal reasons
* A good example of an architecturally distinguished house of this period, with significant original details: cast-iron verandahs, Chinese-style Gothick glazing.
* A strong historic setting in substantial grounds on a hillside overlooking the River Dart valley.
* It makes a strong contribution to the character of Bridgetown and provides evidence for the historical development of Totnes.