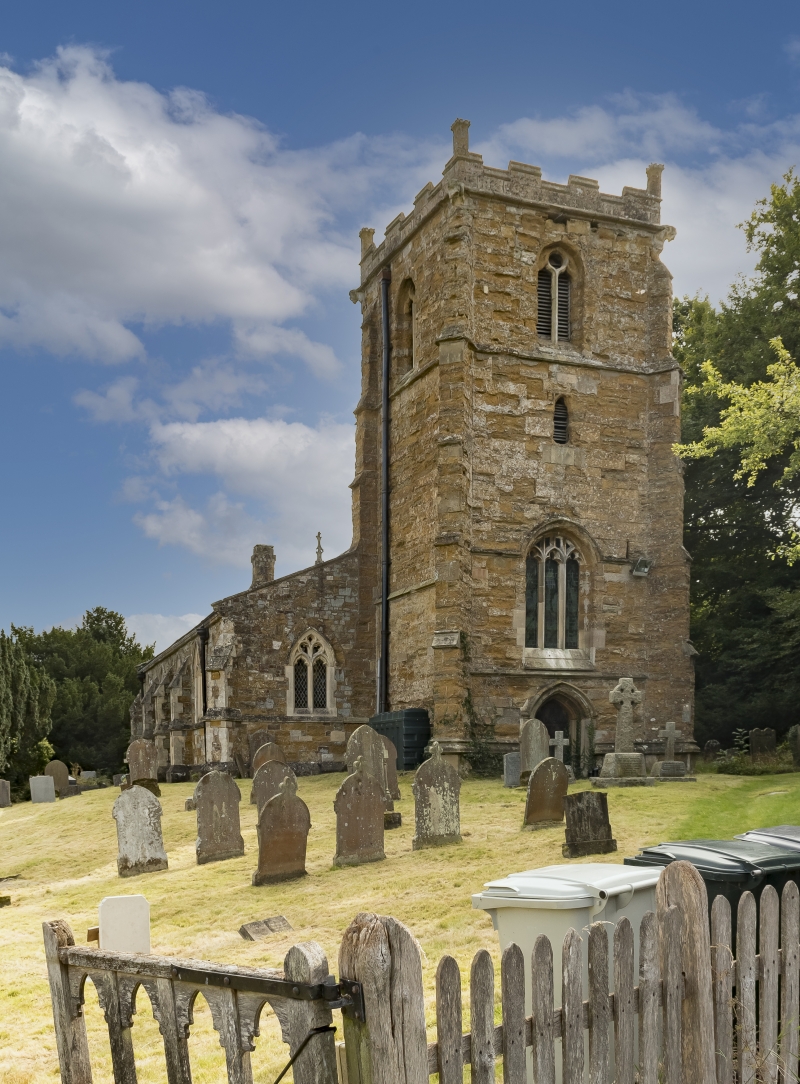 Parish church. C14, C15, 1849 by S. S. Teulon. Squared
ironstone rubble with ashlar dressings, with stone coped slate
roofs having cruciform finials. Western tower, nave, north
aisle, chancel, south porch. The short C14 3 stage tower has
moulded plinth, chamfered string courses, castellated parapet
with angle beast corbels, castellated pinnacle bases to the
corners and stepped full height angle buttresses. The belfry
stage has paired ogee headed louvred lights with vesicas over in
single chamfered surrounds in the principle directions. The C15
west door has a hollow chamfered surround, 4 centred head and
moulded hood. Above is a C15 3 light window with trefoil heads
to lights, panel tracery, hollow chamfered surround and hood.
The middle stage has a single light with trefoil head, sunk
spandrels and rectangular surround. The remaining parts of the
Church were rebuilt in 1849 in the Decorated style. The east and
west walls of the north aisle have single 2 light windows with
cusped ogee heads to the lights, paired mouchettes and moulded
hood. The north wall has 4 similar windows separated by
buttresses. The chancel north wall has a single light with
cusped ogee head and hood. The east wall of the chancel has a 3
light window, cusped heads to the lights and flowing tracery with
mouchettes and daggers. The south wall has 2 windows of 2 lights
with cusped ogee heads to the lights and cusped tracery and
hoods. The nave south wall has 3 taller 2 light windows matching
those on the north side. The gabled south porch has a moulded
outer doorway with shafted responds, foliate capitals and moulded
hood. The porch has stone side benches, and inner doorway with
simple continuous filleted roll moulded surround. The door has
elaborate curvilinear wrought ironwork. Interior. The north
nave arcade is of 4 bays, with octagonal piers and responds and
double chamfered arches. The moulded hoods have single end stops
of the Young Queen and a Bishop. The C14 tower arch also has
octagonal responds, moulded capitals and single chamfered head,
all in a continuous single chamfered surround. The chancel arch
has octagonal responds and richly moulded head. Cusped king post
roof to nave with ballflower corbels and arch braced roof to
chancel with similar corbels. All fittings are C19 including
painted metal commandment boards, but the font is C14 with
octagonal base, shaft and bowl having blank shields in
quatrelobes to the side, with C19 conical pulley operated cover.
In the chancel by the north wall a small C13 slab with stepped
cross and sheep shears. Also on the north wall a small brass
wall plaque records the rebuilding of the church in 1849 by Rev.
E. W. Hughes in commemoration of his son.