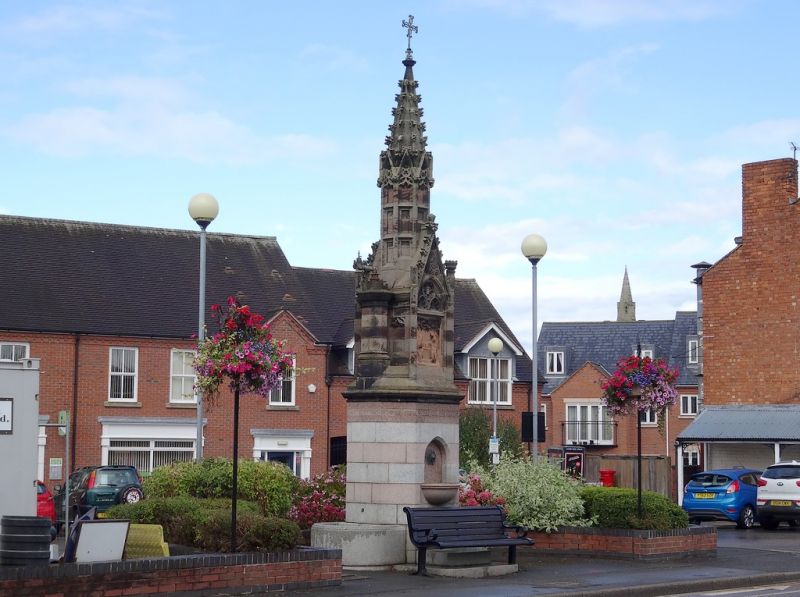 Drinking fountain, Dated 1882. Banded pink and grey granite base and banded
red and grey sandstone ashlar upper parts. Octagonal plan. In a Gothic
Revival style. Base with moulded stone cornice, steps up to chamfered-
arched recess to front and back with copper lion-mask spouts and semi-circular
bowls, and former semi-circular animal troughs to each side (flower beds at
time of survey - November 1986). Inscription around top: "EVERY : ONE :
THAT : DRINKETH / OF : THIS : WATER / SHALL THIRST : AGAIN / BUT :
WHOSOEVER / DRINKETH : OF : THE : WATER : THAT / I : SHALL : GIVE : HIM /
SHALL : NEVER : THIRST / ST JOHN : CHAP 4: VER 13 & 14". Chamfered
offset to top part. Moulded arches to front and back, each with 2 cinquefoil-
headed lights (but no central shaft), blind tracery, flanking square buttress
with battlemented caps, and crocketed gable above with finial. Each side with
2 cinquefoil-headed blind panels, octagonal pier with moulded base and
cap, and disused gas-lamp fitting. Octagonal pinnacle above consisting
of blind ogee trefoil-headed panels to sides with gables above, and short
crocketed spire with wrought-iron cross finial. Carved panel in arch to east
depicting 2 women drawing water from a well. Inscription in arch to west
not completely legible at time of survey (November 1986): THIS FOUNTAIN WAS/
ERECTED BY JOHN CHURTON / OF ... / IN LOVING MEMORY OF / HIS PARENTS AND...
WIFE / ANN CHURTON AND AS / A MEMORIAL OF HIS / AFFECTIONATE & ENDURING /
INTEREST IN THE WELFARE / OF HIS NATIVE TOWN 1882". The fountain formerly
stood at the junction of Green End, Brownlow Street, Talbot Street and
Station Road, but when the by-pass was built in 1924 it became a hindrance
to traffic, and was eventually moved to its present site in the early 1930's.
Whitchurch Area Archaeological Group, Whitchurch Remembered (1979), ill.71.