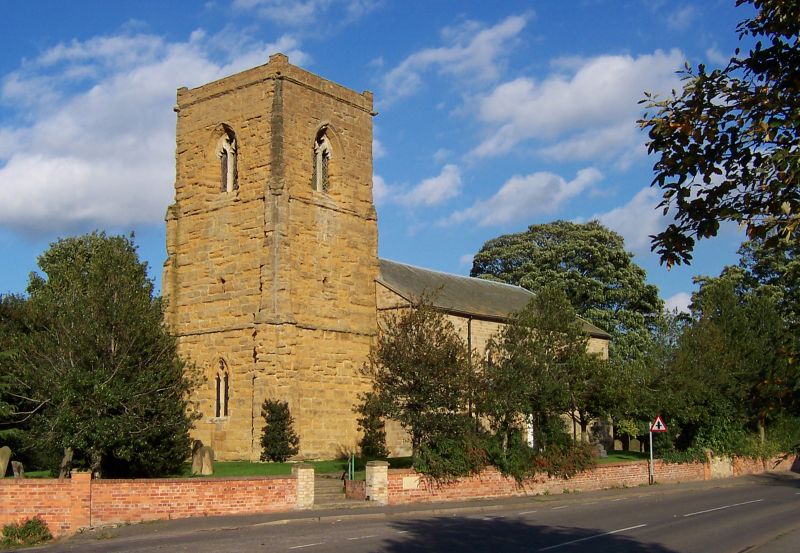 Parish Church; C13, C14, 1798, 1853 resoration by W.
Butterfield; 1889 restoration by Hodgson Fowler. Ashlar,
coursed ironstone rubble, slate roof with lead dressing; western
tower, nave, south porch, polygonal apse and vestry. The tall
3 stage ironstone rubble tower has a low plain chamfered plinth
with 2 chamfered string courses, a weathered battlement and
corner pinnacles. There are corner buttresses to the 1st stage
only. On the south side is a small C13 trefoil headed light to
2nd stage. The C14 belfry openings are 2 light, cusped and
reticulated with hood moulds. The west face has a 2 light C13
repaired window and a small light above as the south side. On
the east face, above the belfry opening is a clock. The tall
ashlar nave was built anew in 1795 after the merging of the 2
South Kelsey parishes of St. Nicholas and St. Mary. It has a
tall plinth and cill string course. The fenestration on north
and south faces is identical and consists of 4 two light C18
Gothic windows with later C19 tracery and a smaller 2 light
window over the north door, all dating from the restoration of
1853. The apse is even taller than the nave and has 3 C19
lancets. The C19 south porch has a battlemented parapet.
Interior: The nave is plastered and has late C18 wainscotting.
The early C14 tower arch is triple chamfered with polygonal
shafts and moulded responds. Over this is a Royal Coat of Arms
to George IV and to either side are 2 large C19 paintings as at
Normanby le Wold. The pews are C20 but one small bench at the
east end of the nave is in oak and early C18 with panelled back
and C17 carved panels to legs. The screen in front of the
chancel is late C18. The sanctuary chair has a highly
decorated back and is inscribed. "TH 1690". The font is a
plain round bowl on an octagonal pillar and plinth. Monuments:
on the north wall of the apse are 2 brasses, one of a knight with
his feet on a lion, the other of a lady (headless) her feet on a
dog. Two shields beneath and the scant remains of an inscribed
surround remain. They date from the early 15th century and are
to the Hansard family. In the north wall of the nave under an
arched recess is a cross legged effigy of Sir Robert Hansard, d.
1313, with his feet on a lion and his hands in prayer. The
chain mail bears-traces of the original red and yellow paint.
Information from the Lincoln Archives office confirms that the
rebuilding in 1798 in part used stone from the Church of St.
Nicholas which was demolished at that time.