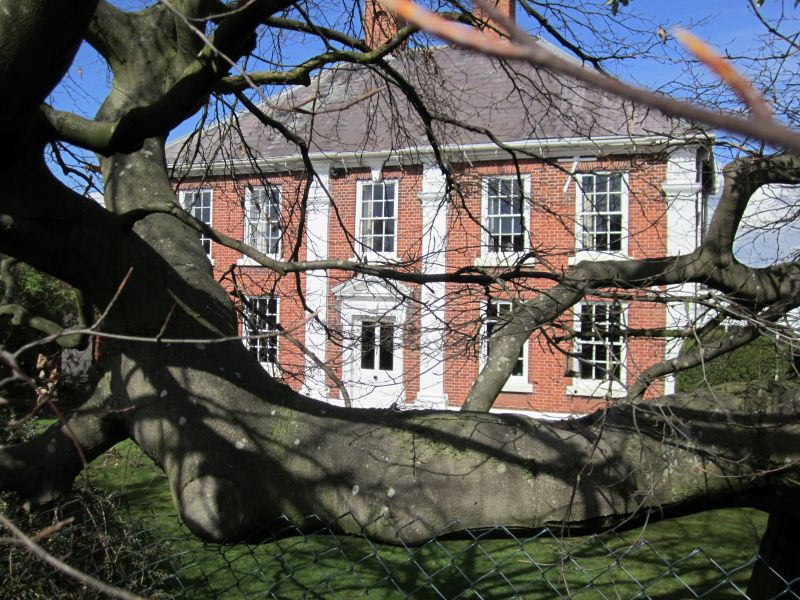 Originally a farmhouse now a private house, early C18. Red brick in Flemish
Bond with slate roof. 2 storeys, 5 bays. Ogee moulded stone plinth. Giant
Doric pilasters to quoins and flanking the central entrance bay. The entrance
has a stone doorcase, eared top and bottom, a keystone with foliage motif, a
pulvinated frieze -and pediment with dentil cornice. This contains a four panel
door with lower panels raised and fielded and upper panels glazed. Slightly
recessed sashes with stone sills and sunk brick panel below, glazing bars and
gauged skewback flat heads. The centre bay, first floor, window has stone key
with grain motif. Moulded stone gutter cornice between the pilaster caps which
have triglyphs and guttae. The roof has lead hips and two symetrically placed
stacks with arch-headed sunken panels. There are built-up window openings in
the north and south gables. At the rear (east) there is a 2-storey, 2-bay wing
of red brick with roof of large slates; the ridge of this section is at main
house eaves level.
Interior: The rear wing has chamfered beams and exposed ceiling joists also
original roof trusses. There are wide three-panel doors in the main building
on unusual "H" hinges with a single long leg. Graded II* for the high quality
of the Baroque facade.