A Grade II* Listed Building in Bray, Windsor and Maidenhead 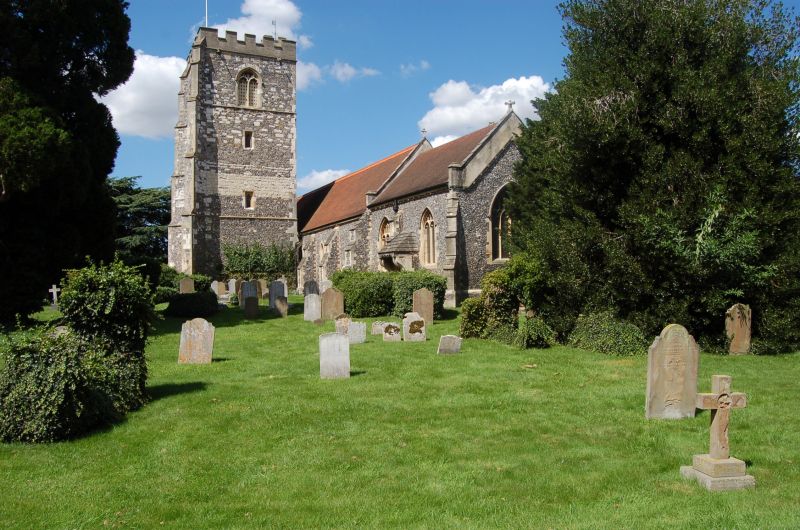 Large Parish church. Dates from c 1300, altered and partly rebuilt c 1500, extensively restored
1857-1862 by T. H. Wyatt. Flint with stone dressings, originally of chalk; steeply pitched, tiled
gable roofs. South tower, nave, north and south aisles, chancel, north and south chapels. Tower:
flint rubble with chalk dressings. 3 receding stages with angle buttresses of 4 offsets at the
southern corners. Square stair turret, slightly projecting, in the north-west angle with the nave,
with embattled parapet rising above the embattled parapet of the tower. The doorway in the south
wall, restored 1875, has a moulded 2-centred head, and jambs with traceried spandrels within a
square external label. Above this is a pointed arch of chalk. The ringing stage is lighted on the
east and west faces by small, single, square-headed trefoiled lights. The bell chamber has a
window of 2, cinquefoiled lights on each face, with pierced stone panels and with vertical tracery
within a 2-centred head. There is a clock face within the third stage on the south. The ground
stage is ceiled by a form of sexpartite vault with a central circular opening and moulded diagonal,
transverse and ridge ribs with bosses at the intersections. The vault springs from triple vaulting
shafts with moulded bell capitals with octagonal abaci; moulded bases with octagonal plinths on
low stone podia with moulded cappings. South aisle south front: two, 2-stage buttresses, 4
windows, the 3 easternmost are coupled lancets; between the second and third windows are the
remains of a C13 pointed-arched doorhead, now filled with flint. The westernmost window is a
single trefoiled light. South aisle, west front: one 3-light window with reticulated tracery.
Nave, west end: two, 2-stage buttresses. A C19, 3-light window with geometrical tracery. C19
door under in pointed chamfered arch and hoodmould with foliage ends. North aisle: Five, 2-stage
buttresses, 4 windows. The easternmost window is late C15 with 3, cinquefoil lights under a
traceried square head. The other 3 windows are early C14, reset, except the westernmost, which is
a C19 copy; each has 2, trefoiled lights with a foliated spherical triangle, within a 2-centred
head. North chapel: three 3-stage buttresses. Flat roof line is higher than eaves line of north
aisle. Chancel: East window is a 4-cinquefoil light, with a traceried 4-centred head; the 2
windows in the north front are each of 2 similar lights and traceried heads. All are C19,
incorporating older material. South chapel: C19 stone porch with large curved brackets, stone
slated pent roof, and a pointed moulded, arched, stone architrave with foliated spandrels and plank
door. A C19, 3-light window on left, and a C19, 2-light window on right, both with cusped trefoiled
and traceried heads. Interior: 6-bay nave arcades, with 2-centred arches of 2 orders, each order
being moulded with a sunk quarter-round; octagonal columns. The eastern arches are wider and the
eastern arch of the south arcade is built of original chalk voussoirs from the earlier church. The
south doorway is probably C14 and has a 2-centred head, and is of 2 orders; each moulded with a
sunk quarter-round. To the east of the south doorway is a recessed holy water stoup with moulded
jambs and a segmental 2-centred head. To the west of the south doorway is an octagonal font with
quatrefoil panels and a wooden cover which was made in 1647, as entered in the book of
churchwardens' accounts for that year. The chancel has a 2-bay arcade on the north and south;
that on the south, to the south chapel, is early C14 and of chalk. It has 2-centred arches of 2
orders, each moulded with a sunk quarter-round, supported by an octagonal column and responds with
moulded capitals and bases. The north arcade was re-built in the C19 to match the south arcade.
The chancel arch is of 2 moulded orders, and there is a late C15 doorway in the north wall of the
chancel, leading to the vestry. The roofs are C19; the nave has a plain braced collar roof of 6
bays; the chancel has an arched braced collar roof of 4 bays. Monuments: there are several
brasses of the C14, C15 and C16. Against the west wall of the north aisle is a sepulchral stone,
decorated with a foliated cams with the letters LAG on the arms. On the north wall of the chancel
is a mural monument with an egg and dart frame to William Goddard of Philibert, d.1609, founder of
Jesus Hospital, and Joyce Maunsell his wife, d.1622: within 2 niches under an entablature and
broken pediment supported by marble Corinthian columns, are painted three-quarter figures of
William Goddard and his wife; over the entablature is a shield of arms.
VCH (Vol III), p.107 et seq., B.O.E. (Berkshire), p.99