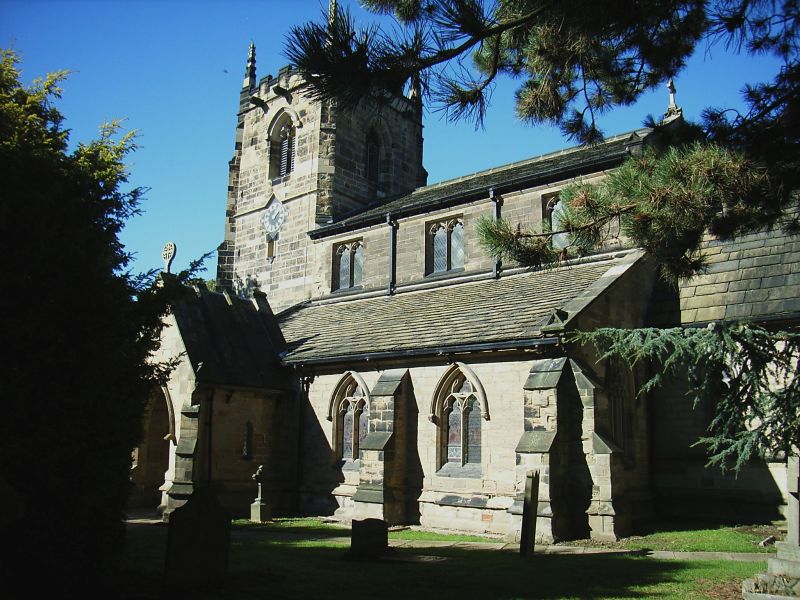 Parish church. C15 west tower, otherwise 1855 by J. W. Hugall (Pevsner).
Coursed squared sandstone, stone slate roofs. West tower, aisled nave with
south porch, chancel with north vestry. Four-stage tower with diagonal
buttresses and weathered plinth has a wide 2-centred arched west doorway with
2 orders of cavetto moulding and C19 hoodmould, above this a restored 4-
centred arched 3-light window with matching surround, Perpendicular tracery,
and hoodmould, a recessed lancet to the 3rd stage, a dripband carried round;
in each side of the top stage, a recessed belfry window of 2 cusped lights
with a quatrefoil in the head and a hoodmould, a dripband with 3 gargoyles, a
restored embattled parapet with crocketed corner pinnacles; and a flag mast
rising from the centre of the roof; the south side has a niche to the 3rd
stage, and a diamond-shaped clockface above this (the band stepped over it).
Three-bay nave and aisles; 1st bay of south aisle has a gabled porch with
diagonal buttresses, 2-centred arched outer doorway with chamfered surround
and hoodmould, a niche with a statue, and an apex cross; buttressed aisles
have 2-centred arched windows all of 2 cusped lights with trefoils in the
heads (cinquefoils in north aisle) all under hoodmoulds with figured stops;
3-light windows at east and west ends of aisles, in similar style; nave has
square-headed clerestory windows of 2 cusped lights. Three-bay chancel has
moulded 2-centred arched windows of 1 and 2 lights, under hoodmoulds with
foliated stops, and large 2-centred arched east window of 5 lights with
shafts and bar tracery in Decorated style. Vestry on north side, of 2 bays
with a north transept, has a 2-centred arched doorway with shafts and 2
orders of moulding, and a hoodmould, flanked by windows similar to those of
the aisles, and a tall 2-light window in the gable wall of the transept.
Interior: nave arcade of double-chamfered 2-centred arches carried on
quatrefoil piers with moulded caps; tall chancel arch with similar responds,
foliated caps, and 2 orders of moulding; attached to east end of north aisle
wall, an ex situ monumental slab commemorating Sir Roger Hopton and Anne his
wife (died 1506), with Latin inscription round the margin and incised full-
length cross flanked by shields of arms; on north wall of tower, a fine early
C18 wall monument to members of the Lowther family of Ackworth Park, in a
Corinthian aedicule with broken pediment; in base of tower, a medieval tub
font on quatrefoil base, and at west end of south aisle an octagonal font
with raised lettering on the side panels, including the date 1663. In south
aisle, a wall monument to Robert Gully, son of John Gully Esq of Ackworth
Park, with full inscription recording the circumstances of his death during
the Chinese War of 1842 (now known as the Opium Wars).