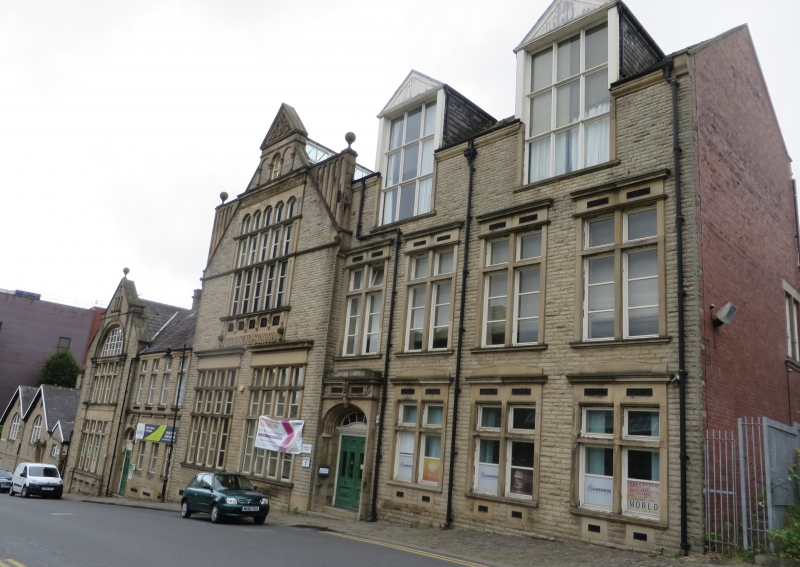 Former Technical School. 1893 and c1900. Designed by Harry Bagshaw
Buckley of Batley. Rock-faced stone with ashlar dressing. Slate
roofs the central one with clerestory. Raised gables, coped and with
kneelers. Various stacks. Street front has slightly projecting
gabled centre with two large 4 light cross mullion windows topped with
entablatures. Above a single 5 light similar window with bracketed
cill and below TECHNICAL SCHOOL in carved panel, above a carved
entablature then a single round headed window flanked by blind arches
and topped with a steep carved pediment. To the right a 3 storey 4
window range with to the left a segment headed doorway with double
panel doors and fanlight in moulded surround with mermaid keystone.
To the right three 2 light cross mullion windows with flat hoods.
Above 4 taller similar windows, and above again 2 large 9 pane
through-eaves dormer windows with pediments. To the left the slightly
later Stubley Memorial Wing, has 4 window range with a doorway to the
left with double and overlight in moulded surround, to the right 3
single light transom windows with flat hoods, above 4 similar windows
to the eaves. Beyond to the left a slightly projecting gable wing has
a projecting centre with flanking pilasters rising through the gable.
This centre has a 4 light cross mullion window with incised heads,
above a similar window and above again a large semi-circular window
with glazing bars and a large carved keystone which forms the cill to
the 3 blind windows in the gable topped with a ball finial. The
Stubley Memorial Wing was paid for by the Stubley family owners of
Bolton Mills one of the largest textile mill complexes in Batley.