A Grade I Listed Building in Elland, Calderdale 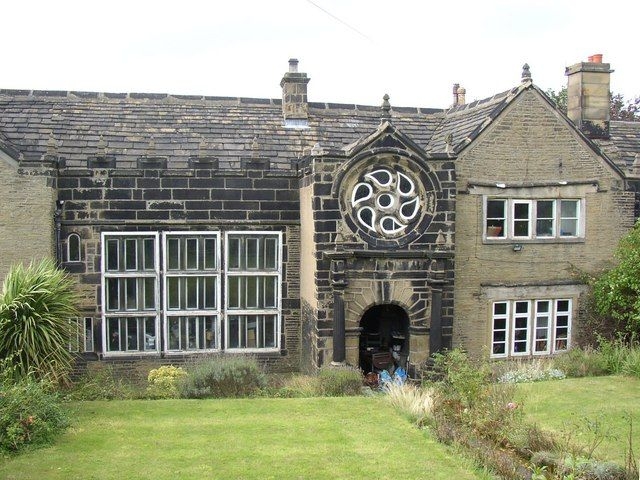 I
Important 'gentry' house, built in the second half C15 for Nicholas Savile. Exposed timber frame to the north and interior, with partial cladding in hammer-dressed stone, with dressed stone to hall range of south front. Stone slate roof. H-plan, hall-and-crosswings which project to both north and south.

South front in stone, of six uneven sized cells, reads from the left: a) western two storey wing, b) two bay hall, refronted c.1640 by John Foxcroft, c) cross passage with two storey porch, d) eastern two storey wing, e) mid C18 two storey extension set back from hall range but with C17 single storey outshut with chamfered mullioned windows to north, f) early C19 gabled wing breaks forward. Cells a) and d) both have coped gables with kneelers and finials and early C18 windows of four-lights with recessed flat faced mullions with square reveals to both floors, with projecting surrounds, and crude edged-slate hoodmould over with straight returns. Left hand return wall of a) and right hand return wall of d) have large well dressed lateral stacks with offsets, set upon a plinth (probably built on to the earlier timber-framed wings). Cell b) has spectacular double chamfered mullioned and transomed hall window of twenty seven lights arranged in three panels of nine-lights with two transoms, divided by king mullions. To the left there is a two-light double chamfered mullioned window to light the upper end of the hall, and over a single arch headed light for the gallery. A hoodmould continues over the windows. Embattled parapet has C20 finials in keeping. Cell c) has impressive ashlar-faced projecting porch with flamboyant rose window of central circle surrounded by six mouchettes, an 'apple and pear' window, with semi-circular hoodmould over. Small gabled parapet with original finial to apex and carved heads on the straight returns and embattled to the return walls. The outer doorway has semi-circular arch riding from moulded imposts and has moulded jambs and voussoirs. To either aide are fluted Doric columns with straight entablature and a lozenge carved on the rectangular plinth. The inner doorway of the porch is similar, but arch and jambs have alternating flush and projecting stones with rusticated voussoirs, a vernacular version of a Gibbs surround. Cell e) is partly built over the extruded stack to the east wing which has large quoins; to the right is a cross window (for staircase) with flat faced mullions over a doorway with monolithic jambs, four-light flat faced mullioned window with broader central king mullion and same to first floor. At the end of the bay is a large ashlar stack to ridge. Cell f) has a projecting two storey wing, C19. Rough rubble, with three-light flat faced mullioned window with dame over with projecting sill and square opening in gable. First floor also has taking-in door (blocked). Right hand return walls are rendered.

North front had surviving timber frame at first floor level with stone walls set forward to ground floor. East wing has four-light double chamfered mullioned window with three panels of timber framing over. The central panel had close studding and projecting window while the outer panels have diagonal braces. The gable projects and is supported by arch brace to side and has heavy tie bead and king post truss with 'A' struts protected by projecting eaves with unusual thistle shaped wooden finial to apex of gable. This has leanto with cat slide roof over rear entry of through passage, large kneelers to entry support close studded wall over. West wing also has part timbered outshut but with re-used inserted C17 doorway and five-light double chamfered mullioned window with hoodmould with spiral stops. Over are two flat faced mullioned windows of three-lights and four-lights to first floor. Only the gable shows the exposed king post truss with 'A' struts and arched brace to ridge of projecting eaves. Right-band return wall is rendered and has three small double chamfered windows and some quoins to the angle.

Interior: both wings have parlours to south front with 'coffered' ceilings with cross beams and secondary spine-beams, all stop chamfered at the intersections; west wing has nine panels, and east wing six with C16 painting of the elephant and castle, and the pascal lamb with cross, both surrounded by intertwined rope, to the underside of wide original floorboards. Both parlours have large fireplaces with heavy roll-moulding (possibly, early C16). Open hall, without side-aisles, has heavy timbered post and King post truss with cambered tie beam to the soffit braced to the ridge. Oak panelled walls with brattished spring-board to dais canopy, (now gone). An oak staircase ascends to a gallery running round three sides. A segmental stone arched fireplace is surmounted by spectacular large plaster cast of the Royal Arms, dated 1670 (coloured and gilded).

This house is one of the most important vernacular buildings of West Yorkshire. During the C17 it was occupied by Dr. Power one of the first elected members of the Royal Society.