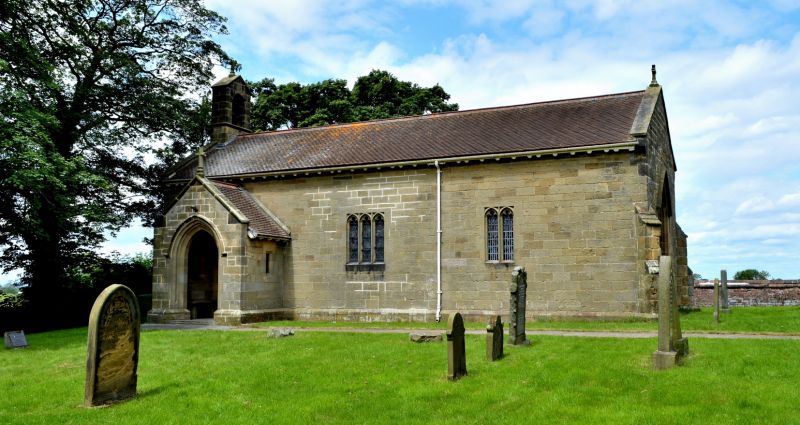 MATERIALS
Sandstone ashlar except for most of the north wall which is built of stone rubble (in situ medieval stonework) and most of the east wall which is coursed, squared sandstone. Plain red tile roof. Cast iron rainwater goods.

PLAN
Three bay, undivided church except for the step up into the sanctuary and a small gallery at the far west end. South porch and a bell-cote at the west end.

EXTERIOR
Surviving medieval fabric appears to be restricted to the north wall and includes a small lancet window towards the east and, towards the west, a low, two-centred arched doorway with imposts, both being blocked. Inserted towards the centre is a small, two light, square headed window with trefoil plate tracery.

The east end, which may also largely predate the 1885 rebuilding, has a simple three-light bar-tracery window beneath a hood-mould. Changes in the stone work show that the gable wall has been raised. It is supported by angled, stepped buttresses and the gable is raised above the roofline, stone coped with a simple stone cross at the ridge.
The south wall appears as a single build. It has two windows, a two-light to the east and three-light to the centre, both being square headed with trefoil plate tracery. To the left is the south porch which has a raised, coped gable surmounted by a stone cross. The porch is open and has a two-centred archway that has double, hollow-chamfers beneath a hood mould. The doorway into the church is similar. To the sides of the porch are simple rectangular windows with distinctive rectilinear leading.

The west end has a four-light window similar to those of the south wall, but also with distinctive rectilinear leading. The stonework is of a single build, includes a high plinth and there is some snecking to the stone coursing. The raised coped gable is topped by an ashlar bell-cote surmounted by a cross.

INTERIOR
The timber roof structure is exposed and is an arch braced truss roof supported by unadorned stone corbels, but with fine carving to the wall plates. The sanctuary is separated from the rest of the church by a step and is flanked by a pair of baroque, Corinthian style aedicules. These are hardwood and are thought to have originally been part of a reredos in Newcastle Cathedral. Hardwood altar rail and choir stalls. Three-light south window by Morris and Co. Small raised gallery including pews at the far west end of the church.

North Window
This is a memorial to Gertrude Bell, Sir Lowthian Bell's granddaughter. It is highly distinctive with clever use of leadwork integrating the simple stone tracery with the pictorial depictions of the stained glass, the whole window surrounded by inscriptions to form a unified design. The inscriptions include Arabic text believed to be part of a poem by the mystical poet Hafiz who was translated by Bell and published in 1897. The two-light window depicts figures of East and West, illustrating aspects of Bell's remarkable life. West has a figure of a monk above a view of Magdalen College Oxford (Bell gained a First in Modern History at Lady Margaret Hall after just two years) and below a depiction of the Matterhorn (in 1899-1904 she climbed a series of alpine mountains including at least ten new routes or first assents). East is represented by a female figure in exotic Arabic dress, above a view of Khadimain near Baghdad (she could be credited with the creation of the state of Iraq in the early 1920s through her role as an advisor to King Faisal and her various positions within British military intelligence), and below a depiction of a camel train (before the First World War she travelled widely through Arabia and was made a Fellow of the Royal Geographical Society in 1913 soon after membership was opened to women). Other decorative details draw further distinctions between East and West.

East Window
This three-light, bar-tracery window is another quality design by Strachan, integrating the lead work into the design and making careful use of colour to harmonise with the stonework of the window. However for a Strachan window it appears to be unusually conventional, for instance including halos which Strachan typically avoided. This window has additional technical interest as it is made up of different thicknesses of glass to provide different qualities to the light passing through the window.

The medieval Church of St Lawrence was a chapel of ease within the parish of Rudby. It was reconstructed in 1885 by Robert James Johnson and was commissioned by Sir Lowthian Bell, an industrialist who had bought the Rounton Estate in 1865. Johnson, a Newcastle architect of national renown, was an early critic of Victorian restoration practice (characterised by wholesale rebuilding to new designs rather than careful restoration and conservation of the original (Faulkner, 1995)). St Lawrence was one of his last works, about the same time as his reconstruction of the choir of St Nicolas cathedral, Newcastle and his new design of St Hilda's, Whitby. Bell also commissioned the lych gate which is by Philip Webb, Webb having been engaged to design a new house for the Bell family, Rounton Grange, as well as a school for the village opposite to the church.

The church has three stained glass windows: the earliest, in the south wall, is by the firm of Morris and Co.; the other two are by Douglas Strachan, an internationally acclaimed stained glass artist of the first half of the C20 who worked mainly in Scotland (Parker, 2008).

St Lawrence's Church is listed at Grade II for the following principal reasons:

* Leading craftsmen and designers: despite serving a small rural community, the church features the work of nationally significant architects and craftsmen: Robert James Johnson, Philip Webb, William Morris and Douglas Strachan.
* Stained glass: the two windows by Strachan (an internationally acclaimed craftsman who made around 340 windows in his lifetime, mainly in his native Scotland) are of particular note;
* Historic association: Strachan's memorial window to Gertrude Bell illustrates the church's connection with a truly remarkable and nationally significant woman whose work in the first quarter of the C20 still has ramifications today;
* Features: for several notable features such as the two aedicules, the raised gallery and the lychgate by Webb (a leading figure of the Arts and Crafts movement);
* Architecture: as a good example of Johnson's sensitive approach to church restoration and rebuilding.