A Grade I Listed Building in Bakewell, Derbyshire 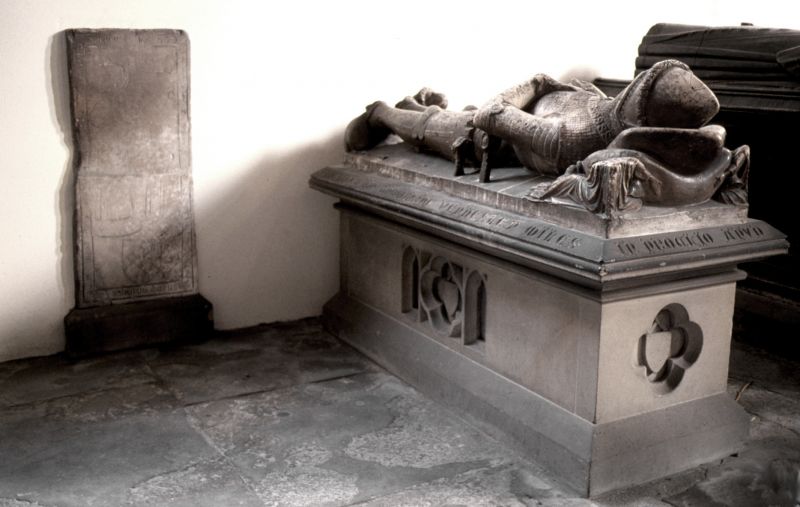 INTERIOR: C12 round arches to short west bay of nave, also
similar blind arches in the west walls of the aisles; some
walling above the arches may be Saxon. Remaining aisle arcades
of 1852 with round piers, octagonal capitals and
cavetto-moulded arches.
Crossing: restored 1841-43 with tall arches having filleted
shafts and colonnettes; ribbed vault. South transept (known as
the Newark) c1220-1240 rebuilt 1841-52: arcade to Vernon
Chapel with quatrefoiled piers having shafts in the diagonals;
deeply-moulded arches.
Chancel: late C13 sedilia and double piscina under linked
hoodmoulds. Windows have nook shafts and rere arches. Mosaic
floor of c1880. C14 octagonal font with cusped arches over
whole figures.
Near the font are parts of three medieval misericords; Royal Arms
of Charles II dated 1678 and an early C19 board listing church
fees.

MONUMENTS: of particular note the small alabaster wall
monument to Sir Godfrey Foljambe and wife c1377 (east end of
south aisle). Vernon Chapel: to Sir Thomas Wendesley d.1403
lying in armour on a later base.
Small alabaster tomb-chest to John Vernon, d.1477.
Polychromatic tomb chest to Sir George Vernon, d.1567, with two
wives.
Standing wall monument to John Manners, d.1584 and wife
Dorothy Vernon; they kneel facing across a prayer desk, the
children below.
Large and more impressive standing monument to Sir George
Manners, d.1623 and wife Grace Pierrepoint d.1650 with their
children in prayer and a baby in swaddling clothes.
Various plaques on west wall of south transept include several
C17 brasses; the most elaborate to William Savile, d.1658,
'Steward to the Earle of Rutland'.
Various wall monuments in the chancel.

STAINED GLASS: north aisle window of 1893 by Henry Holiday;
another by Kempe. Chancel east window of 1892. North transept
window of 1881 by Hardman. Resurrection window in Vernon
Chapel, 1859 also by Hardman. South porch contains a
remarkable and very important collection of Anglo-Saxon,
Norman and early medieval fragments discovered during the
major works of the mid C19; other fragments against west wall
of north aisle.