A Grade I Listed Building in Barden, North Yorkshire 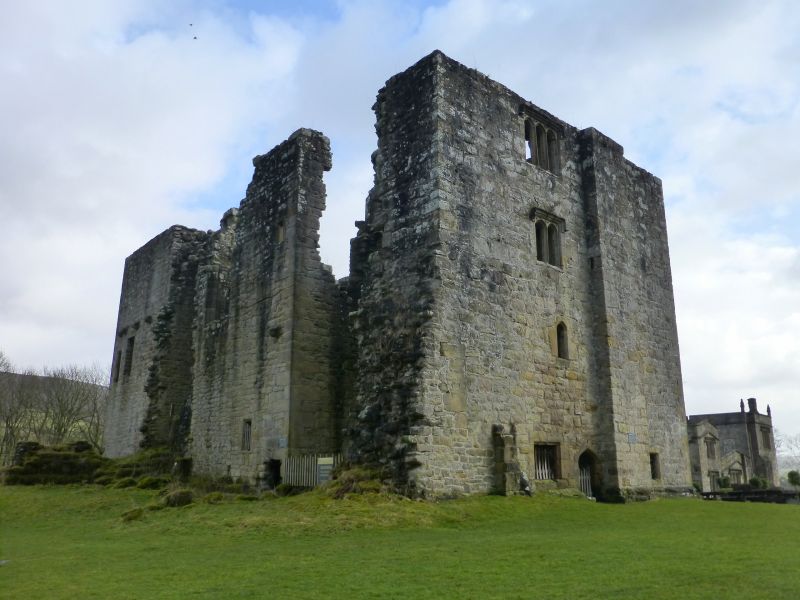 Fortified house, now ruinous. Mid C16, restored in l658-9. Ashlar and
rubblestone. Rectangular in plan, an L-shaped addition to the south-east
corner. Main house: 3 storeys, 4 bays. Small chamfered four-centred arched
doorway to left of bay 2 with tablet above bearing inscription "This Barden
Tower was repayred by the Ladie Anne Clifforde Countesse Dowager of
Pembrooke, Dorsett and Montgomery Baronesse Clifforde Westmorland and
Vescie. Lady of the Honor of Skipton in Craven and High Sherriffesse by
inheritance of Countie of Westmorland in the years 1658 and 1659 after it
had layne ruinous ever since about 1589 when her mother then lay in itt and
was greate with child with her till nowe that itt was repayred by the said
Lady. Isa Chap 58 Ver 12 'Gods Home be praised.". Left-hand bay has a
lancet. Bays 2 and 4 have chamfered openings of large 3-light windows with
hoodmoulds and relieving arches. The bay between is flanked by remains of
walls and has a large double-chamfered, four-centred arched opening. First
floor: left bay has a chamfered 2-light mullioned window with four-centred
arched heads to lights, hoodmould. Bays 2 and 4 have similar large 3-light
windows. To bay 3 a large plain four-centred arched opening. Second floor:
openings are ruinous and open at the top, except that to bay 3 which is of
one light. Left return: external stack to right of chamfered 4-centred
arched door. To left a squared chamfered opening, to right of stack a
chamfered opening. Above 2 chamfered lancets above a 2-light chamfered
mullioned window with four-centred arched lights, hoodmould. Similar window
above of 3 lights. Right return: similar. Rear: ruinous with small
rectangular openings. L-shaped addition: 3 storeys, bays. Left-hand bay
set back, chamfered doorway, chamfered 2-light windows above, one over the
other. Right-hand bay: blind. Band, parapet. Rear: large external stack.
A late medieval tower house of Lord Clifford, 'the shepherd Lord'; of
interest as a small fortification with domestic amenities. Also a scheduled
ancient monument (Yorkshire, West Riding) No 123.