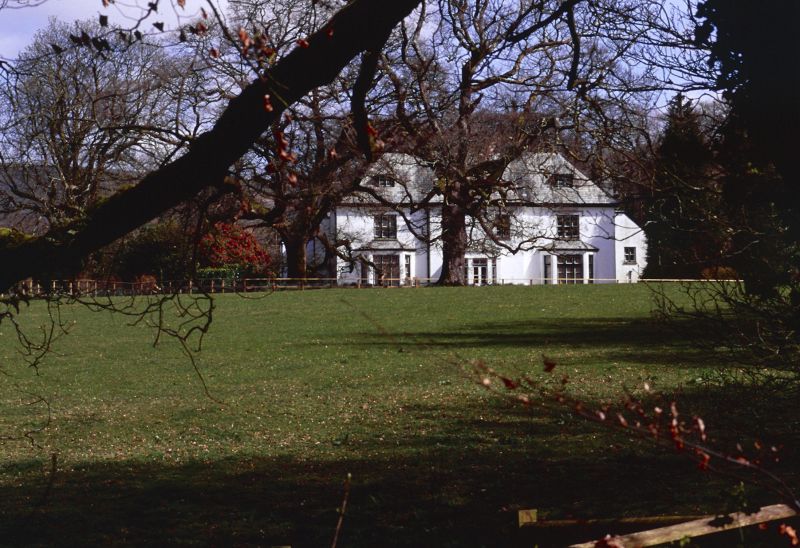 Manor house. Partly C17 with probably early C18 addition, later C18 remodelling and
Victorian alterations.
Rendered rubble walls. Hipped slate roof to front block, gabled to rear wings.
Numerous later C19 rendered brick stacks with moulded caps, mainly axial.
Plan at present extends around 3 sides of a courtyard with a double-depth front
block. The earliest part of the house which is circa early C17 consists of the rear
section of the front block and the right-hand rear wing of which the front range
appears to have had a through-passage. The room to its left was probably the
kitchen; the hall may have been to the right but this section and the rear wing have
been heavily remodelled. In circa late C17/early C18 a good quality parlour was
added at the rear of the left-hand end, creating another small wing opposite the
right-hand wing. Possibly at the same time or slightly later a parallel front range
was added creating a new facade and probably relegating the original front block to
service purposes. In the later C18 the house was externally remodelled and
gothicized. In Victorian times the front range was remodelled to its present form
of 2 large rooms divided by a large stairhall. The gothic fenestration and doorway
were replaced. Possibly at this time the rear left-hand wing was extended with
further service rooms. In the Edwardian period a single storey range was built at
the rear of the courtyard (possibly replacing an earlier block) as a gun-room and
billiard room.
2 storeys with attic to front block. Symmetrical 4 window front with central bay
breaking forward slightly. C20 sashes to lst floor - the outer 2 are 3-light, the
inner 2 are 2-light. On the ground floor are 2 canted bay windows with hipped
roofs. The 1st floor windows have hoodmoulds above which date from the late C18
gothic fenestration. Central C19 pedimented porch has 4 square pillars at the front
and dentilled cornice. C20 glazed doors and side-lights. The 2 rear wings both
project outwards to either side of the front block. -
The rear elevation of the house has equal length wings projecting at either side.
These and the central section have regular fenestration of circa late C18 2-light
casements with arched heads and gothic intersecting glazing bars. The left-hand
wing has at the centre a C17 4-centred arched chamfered granite doorway with C20
plank door. The central rear elevation has a C19 part-glazed door to left of
centre. To the right of centre is the original rear passage doorway with a 4-
centred granite arch which is richly moulded terminating in incised scroll stops;
arched hoodmould above. Contemporary studded plank door. In front of it is a C19
flat granite doorhood supported on a granite columns. The right-hand wing has a C19
reproduction granite arched doorway to right of centre. At the rear of the
courtyard is the Edwardian single storey range. Connecting it to the right-hand
wing is a C17 granite arched doorway. On the opposite side of the courtyard to it
is a similar granite doorway. On the opposite side of the courtyard to it is a
similar granite doorway. In front of it on the outer face of the courtyard is a
contemporary open-fronted gabled porch which is slate hung at the front. It is
supported on 2 granite columns moulded at the top and the base. At the end of the
adjoining rear wing is a C17 granite 4-centred arched doorway which is connected to
the garden wall.
Interior: in the passage of the central early block a segmental-headed chamfered
granite doorway leading to the kitchen. In the kitchen is a granite-framed
fireplace with straight lintel and hollow chamfer. The room behind has circa late
C17/early C18 bolection moulded panelling incorporating a fireplace which has a
contemporary painting of a classical scene in a panel above. In the front range are
Victorian chimney pieces and staircase.
A photograph of the house reputedly in the 1860's depicts its facade with gothic
pointed arched windows and doorway, a castellated parapet and the central bay
gabled.
The house is set in an unspoilt C18 park.