A Grade I Listed Building in Orwell, Cambridgeshire 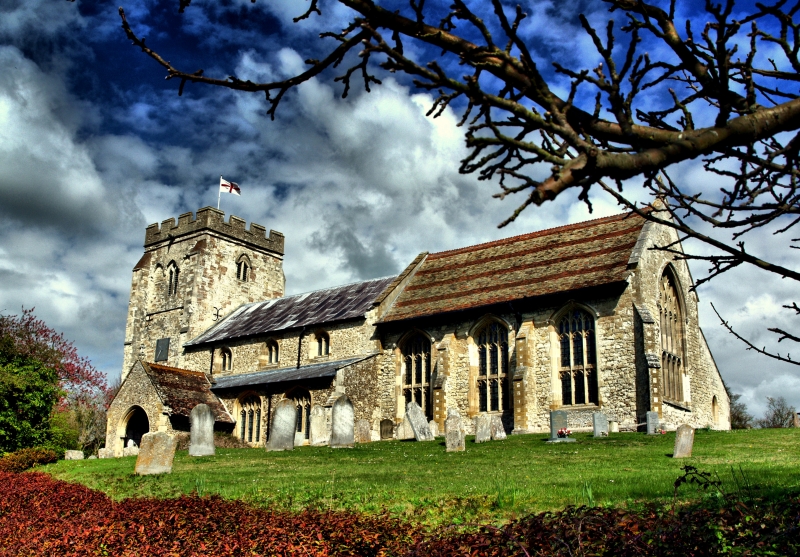 Parish church. C12 nave and ground stage of tower, late C13 North and South
nave arcades, 1398 chancel. The South aisle is late C13 and the North was
rebuilt C19. Restorations of 1860 and 1883. Clunch, fieldstone and
limestone. Tiled and leaded roofs. Plan of West tower, nave North and South
aisles and chancel. West tower of three stages. The C12 ground stage has on
the East side the quoins of the C12 nave as clasping buttresses. There are
single shafts with cushion capitals to the corners of the quoins. The lancet
windows were inserted in the yround stage in the C13, and the upper stages
were added. C13 angle buttressing in three stages to North west and South
west corners. Bell stage has on West and South sides, arcading in three
bays. Continuous two-centred arches, enriched with dog tooth ornament: the
other arches are blind and the inner has a two-light opening with quatrefoil
to the spandrel. The West window is C16 or C17, restored. Nave, C12,
originally without aisles. The North aisle was added late in C13 and the
South aisle slightly later. Clerestorey, C15, restored. Fieldstone, except
for clunch to C12 parts. South aisle, late C13, but restored 1883. West
window early C14, of clunch with reticulated tracery. The other windows are
late C14 in style and restored in Ketton limestone. The South porch was
restored at the same time. The inner doorway retains a late C17 or early C18
six panelled door in two-centred arch, similar to that in the North doorway.
Chancel and sacristy, by Richard Anlaby, rector, in memory of Sir Richard
Burley. Clunch and fieldstone with banded tiled roof. South wall has three
windows, restored, each of three lights with vertical tracery.
The East window is also late C14 of five lights, restored. The North aisle
was rebuilt in C19. Gault brick with reset late C17 or early C18 six
panelled door. Interior: nave arcade of four bays. North arcade late C13 of
two centred arches and of two chamfered orders on columns of quatrefoil
section. The South arcade is slightly later and is also of four bays and two
centred arches of two chamfered orders on columns of quatrefoil section. The
profiles of the columns are slightly different, and there are head stops over
the piers and responds. Nave roof rebuilt c.1600. Chancel arch is late C13.
Two centre and of two moulded arches on piers of half-quatrefoil section.
Chancel has piscina in south wall. Subcusped ogee arch with foliate ornament
and finial. Aumbry in North wall with subcuped ogee arch. Wall monument in
South wall: Jeremias Radcliffe, 1623, of painted clunch. A recess flanked by
Ionic pilasters in four centred head has a frontal half-effigy of deceased.
Ceiling, boarded. Late C14 in origin, in memory of Sir Simon Burley,
reconstructed in mid C18 and repainted 1883. Square panels divided by
moulded ribs with alternate carved bosses and painted shields at the
intersections. Font, C13 limestone, cylindrical bowl on stem. East end of
South aisle has recess with fragment of reredos. Clunch figure of Christ
crucified and St John. Floor slabs reset in wall of south porch.
Saxo-Norman.