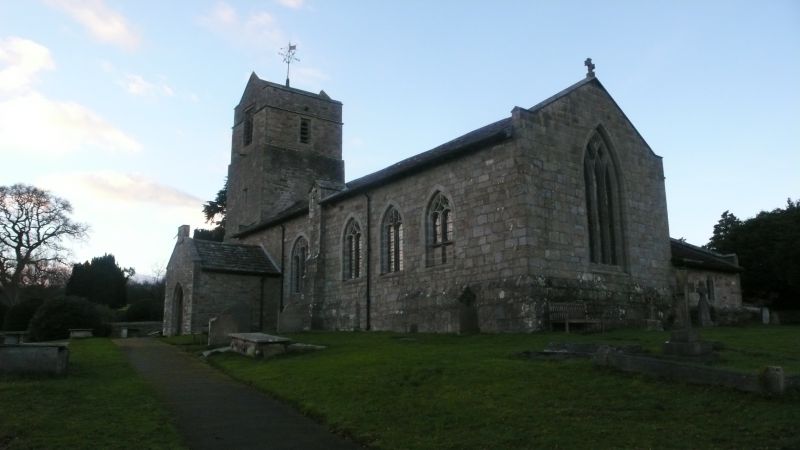 Church, Cl5th, with C13th and Norman remains, tower reconstructed in 1722,
and extensive restoration in 1885-7 by Paley and Austin. Sandstone rubble
with stone slate roof. Comprises a west tower, a nave and chancel under a
continuous roof, a south porch, a north aisle and a north-east vestry and
organ chamber. The tower has a plinth and 2 set-backs. Its saddleback roof
was added in 1885 and has stone gables to the north and south. The bell
openings on the east and west sides are of one cinquefoiled light. On the
east and west sides they are of 2 lights with tracery under flat heads.
The west window of the north aisle has a trefoiled head and appears to be
original. The south wall has a 3-light window to the nave and 3 of 2
lights to the chancel. All have pointed heads with Perpendicular tracery.
The lower part of the right-hand window, below a transom, is blank.
Between nave and chancel there is a buttress. The outer porch doorway is
pointed and chamfered in 2 orders. At the apex of the gable is a
rectangular slate sundial plate. The inner doorway, although restored,
appears to be C12th and has a round arch, angle shafts with scalloped
capitals, and carved decoration. On the north side there are aisle windows
of 3 and 2 trefoiled lights under flat heads. Between them is a doorway
with pointed arch. To the left the gabled organ chamber has a window of 3
lights with Perpendicular tracery and pointed head. To the left the roof
continues at a lesser pitch to cover the vestry, which has a 2-light
pointed window with Y-tracery and a door with pointed head. The chancel
east window is probably late C13th and is of 3 lights with intersecting
tracery. Interior has 3-bay arcade with pointed arches chamfered in 2
orders. The octagonal piers with moulded capitals and bases are said by
the VCH to be C12th. The capital of the western pier is crudely carved
with symbols. The C19th roof has queen post trusses with intermediate
principals with arch-braced collars. The eastern bay of the arcade is
within the chancel, which is divided from the nave by a carved timber
screen. A medieval grave cover is set into the chancel floor. The triple
sedilia and piscina were discovered and reconstructed during the
restoration and have trefoiled heads. The choir stalls, pews and pulpit
are by Paley and Austin and have some carved tracery decoration. The
octagonal sandstone font has carved decoration.