Nos 65 and 66 (The Archway) with Flanking Walls

A Grade I Listed Building in Fonthill Bishop, Wiltshire 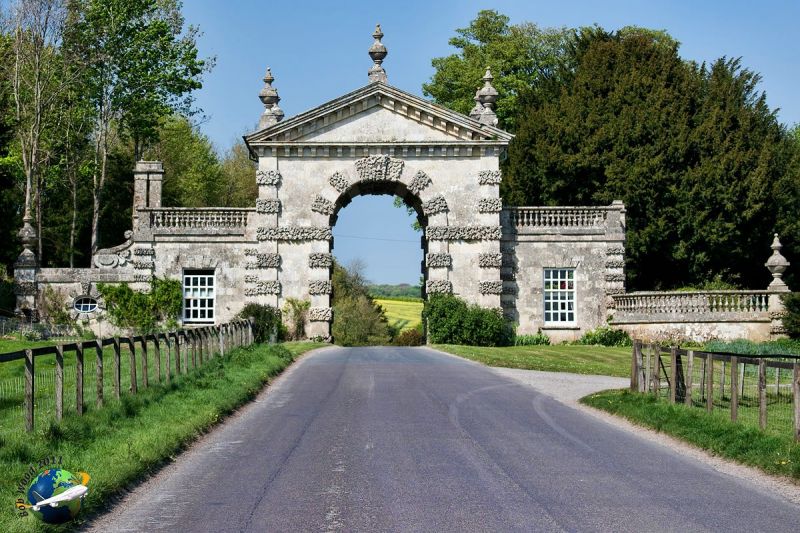 Entry Name: Nos 65 and 66 (The Archway) with Flanking Walls

Archway with lodges and walls flanking approach to park. About 1756, for Alderman
William Beckford and probably by John Vardy, flanking walls c1860 possibly by
G Devey. Limestone ashlar with much vermiculated detail the stone of the flanking
walls is much redder in colour, slate pitched roof to arch, lead flats to lodges.
Classical archway with vermiculated block rustication to pilasters and voussoirs,
rocky mask keystone, heavy modillioned cornice and pediment with large urn finials
with vermiculated bands. Either side are 2-storey lodges, designed as if single-
storey with one large 20-pane sash with thick glazing bars, vermiculated pilasters
to balustraded parapet. No 65 has large ashlar stacks and single-storey extension
with keyed oculus and large enriched volute against main lodge. No 66 has C20
single-storey extension concealed behind curved wall with balustrade and end pier
with urn finials. Six-panelled doors face each other within arch, oculi over.
North facing side has similar detail, but blind windows, attached walls with round-
arched openings through to rear yard of lodges, large enriched volutes against these
walls and on top of lower long flanking walls. Interior of lodges have stone newel
stairs to first floor of lodge and archway, No 65 retains good 6-panelled doors,
planked doors in round-arched openings to first floor. Flanking walls on north
side about 85 metres long and in six stepped sections with short vermiculated pier
with urn finial between each section and large end piers with vermiculated bands,
modillioned cornices and large urn finial. Photographs from the collection of
G Devey in NMR show these under construction. A very fine entrance to Fonthill
Park, probably built at the same time as Fonthill Splendens (1756 by Hoare,
demolished 1807), and executed by Vardy, after a design by Inigo Jones.
(J Lees-Milne, William Beckford, 1976; T Howl and B Earnshaw, Trumpet at a Distant
Gate, 1985; R White in R Brown, The Architectural Outsiders, 1985)