A Grade I Listed Building in Bradley, Staffordshire 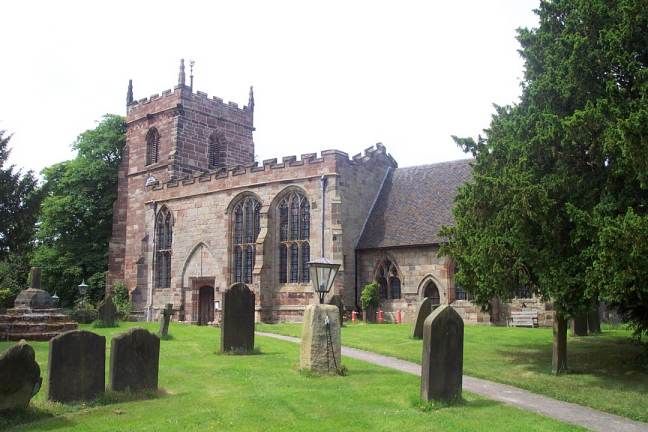 Church of England Parish: Bradeley St Mary and All Saints

BRADLEY
Church of St Mary and All Saints

(Formerly listed as: Church of All Saints)

Plan of nave and chancel with two bay north east Lady chapel, its east wall flush with the chancel, and a three bay north aisle; west tower. Internal vestry at west end of the north aisle.

EXTERIOR: the chancel has clasping pilaster buttresses, and low pilaster buttresses under the sill of the east window which is three-light and traceried in the Decorated style. On the south side the chancel is buttressed with a probably C13 priest's doorway with a medieval timber door. Three Decorated style traceried windows to the south side. The nave has an embattled parapet and an imposing early C16 south elevation with very tall transomed three- and two-light windows with cusped lights. Square-headed Perpendicular south doorway with carved spandrels within an earlier, tall, blind arch. The Lady Chapel is buttressed with a moulded stone cornice, the upper courses of masonry are replacements. It has a triple lancet east window and two C14 two-light traceried windows to the west, one with an integral small square light below the sill, and one four-light square-headed window with cusped lights. The lean-to north aisle has angle buttresses and buttresses with set-offs. North doorway of C19 or early C20 appearance with a plain square-headed window to its west and two square-headed two-light windows with cusped tracery. An C18 sketch of the church establishes that these are later replacements. Two-stage west tower with an internal south west stair turret, diagonal buttresses and a frieze of blind tracery below the embattled parapet. 1907 west window with reticulated tracery; two-light belfry openings with cusped lights.

INTERIOR: exceptionally interesting features and fittings. Unplastered walls. Double-chamfered chancel arch. Impressive Caröe chancel screen, dedicated in 1914 with flamboyant traceried openings and a rood loft, making use of the medieval roof loft stair turret on the south side. Very elegant, tall, three-bay north arcade with piers of quatrefoil section with fillets and rolls and moulded arches. Two bay arcade between the Lady chapel and the chancel with an octagonal pier supporting double-chamfered arches. The plain pointed arch between Lady chapel and north aisle has the scars of two lower lean-to roofs on the west face. Tall double-chamfered tower arch with moulded capitals to the responds. The chancel roof that is visible is an early C20 boarded wagon divided into panels by moulded ribs. The church guide records that a medieval roof survives behind. The Lady Chapel roof is medieval with four tie-beam trusses with cranked tie beams, king posts and curved braces. The north aisle roof is also medieval. The rafters are fixed to a wall plate on the outer face of the arcade, the wall plate supported on stone corbels. There is one tier of purlins. The nave roof is dated 1908, a very shallow-pitched tie-beam roof with short curved braces. The roof is divided into panels by moulded ribs. The east wall incorporates the remains of a C14 reredos, very rare, consisting of a chamfered recess filled with large-scale stone tracery. C12 tub font with unusually lavish carved friezes including a key pattern and a cable moulding. Polygonal timber pulpit of 1907 decorated with buttresses and ogee arches. Panel of medieval floor tiles in the sanctuary. Early C20 choir stalls in an Arts and Crafts style with ends with poppyhead finials. Fragments of Perpendicular stained glass in the south windows of the nave and some in the east window.

Numerous monuments including a wall monument to Sir Thomas Browne, d.1633 and his wife with kneeling alabaster figures. C17 stencilling and text on the north respond of the chancel arch. Nave benches with square-headed shoulders.

Historical Note: the church guide suggests that the north arcade originated at the Augustinian Priory at Stafford and was re-erected here in 1542, after the church wardens are recorded purchasing cartloads of stone. The church has a copy of a c.1798 print showing the north side before the restoration of the north aisle windows. A Chronicle of Bradeley includes a photograph of the interior of the church looking west before Caröe's restoration.