Chapel in the Grounds of the Royal Victoria Hospital 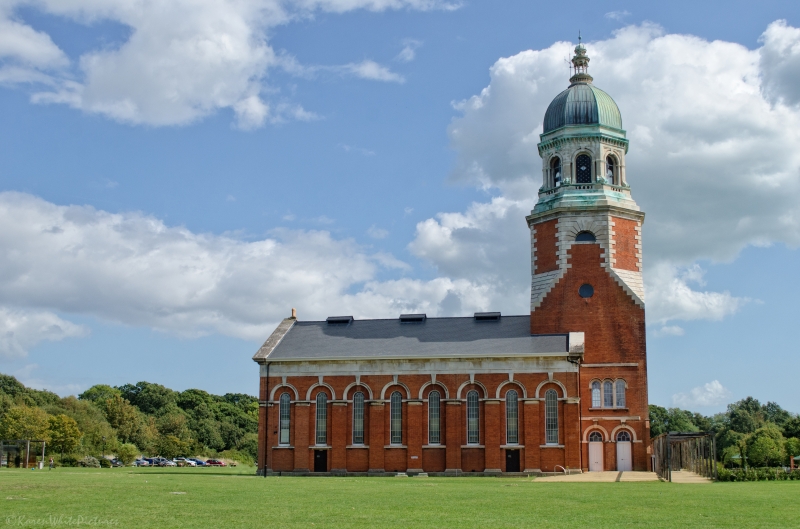 Entry Name: Chapel in the Grounds of the Royal Victoria Hospital

2.
1856-63, by Mennie (War Department Surveyor). A large structure which once occupied
an axial position at the rear of the enormously long-fronted military hospital,
which faced Southampton Water. The hospital has been demolished, leaving the chapel
with an unfinished wall on its south-west side. Classical treatment of simple
rectangle with a tower making the former link to the main blocks. Eight bays to the
sides, divided by pilasters supporting a blind arcade, within which are round-headed
narrow windows; the Tuscan Order details are in stone, with keystones to the arcade,
and a granite plinth, main walling in red brick (Flemish bond).
North ("east-end") front of 1.3.1 windows, again with all the trimmings of a Roman
Tuscan Order, with the gable treated as a pediment.
The tower is massive, the square base rising above roof height; the ornamental upper
treatment starts with broaches, above which the tower becomes octagonal. Above a
cornice, the stone structure has stepped back walling, which then supports a
pavilion of open arches, within an architectural framework of keystone, architraves,
pilasters and entablature on brackets; above this is a cupola surmounted by a
classical finial.
The building retains its status of a Royal Chapel.