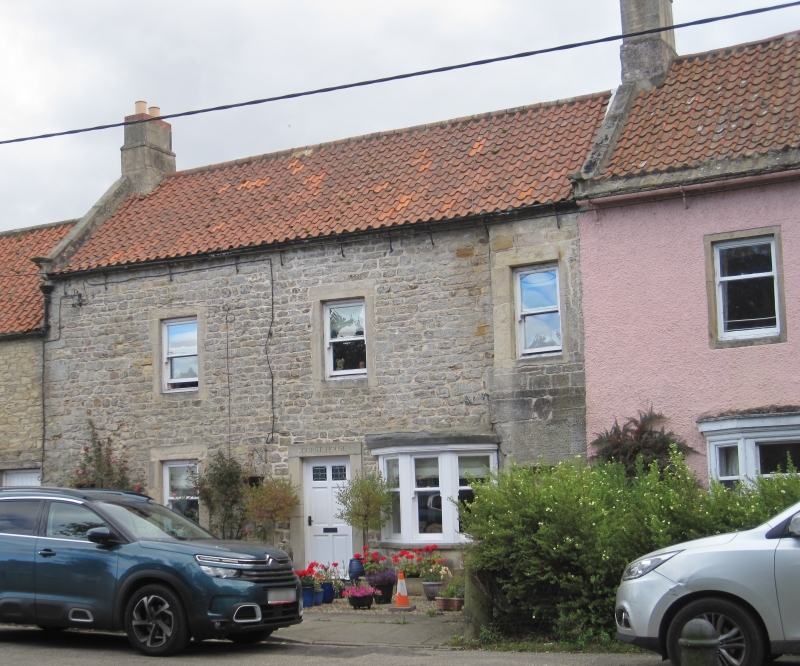 One house, now divided into 2. Circa 1700 with C18 and later alterations.
Lime and sandstone rubble, left 3 bays (No. 11) thinly rendered and remainder
(No. 12) colourwashed render, with rough plinth and ashlar dressings. Pantiled
roof, with stone eaves to central section, rendered and ashlar chimneys,and stone
gable copings. 2 storeys, 8 bays. Inserted 6-panel door and overlight under
thin wood lintel in second bay; partly glazed door in C20 long-and-short stone
jambs and corniced lintel in 6th bay. 2 corniced canted bay windows to right
of door of No. 10, and a very wide one through bays 4 and 5, with renewed plain
sashes; similar sashes on first floor of bays 4, 5 and 6 in plain stone surrounds.
Sashes with glazing bars removed in first bay, and on first floor in second and
third bays, under thin stone lintels and with some stone jamb pieces, suggesting
earlier plain stone surrounds of C17 proportions. Walls of first 2 bays
vertical; battered wall from left of third window. 2 right bays blank, and 3
central bays set back at first floor level.

Interior of No. 11 not inspected.