A Grade I Listed Building in Wycliffe with Thorpe, County Durham 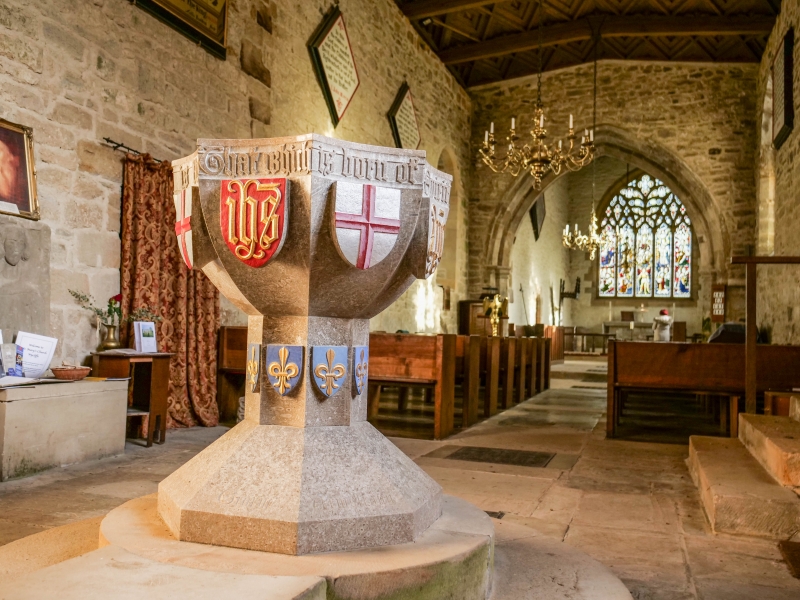 Nave has chamfered plinth except at west end; large stepped buttresses, those
at west end diagonal. West window of 3 lancet lights with pierced spandrels,
under hoodmould with animal-head stops; gabled bellcote with twin arches
above. C14 south porch with chamfered plinth, and double-chamfered arch on
semi-octagonal responds with moulded imposts; hoodmould over. Parapet has
central gable with restored sundial; small chamfered window in west wall.
Inside porch are restored stone benches and old studded south door in double-
chamfered arch. To west of porch is a window of 3 lancet lights under a
hollow-chamfered arch, to east two C14 3-light windows with flowing tracery
and moulded hoods. Built into wall between the windows are 2 stone shields
from a late medieval altar tomb and a fine late-C13 cross slab. North wall
of nave has C19 studded door in old moulded arch, and at east end a restored
C13 window of 2 lancet lights with a vesica over.

Chancel has a lower chamfered plinth and stepped buttresses at angles. South
C19 studded door, in old chamfered arch, and three C14 3-light windows as in
nave; the 5-light east window is late C19 re-using a few medieval pieces.
North C13 2-light window like that on north of nave, but unrestored. Vestry
has flat-faced 2-light mullioned window of c.1700 in architrave. Parapets
were heightened by c.l metre in the late C19.