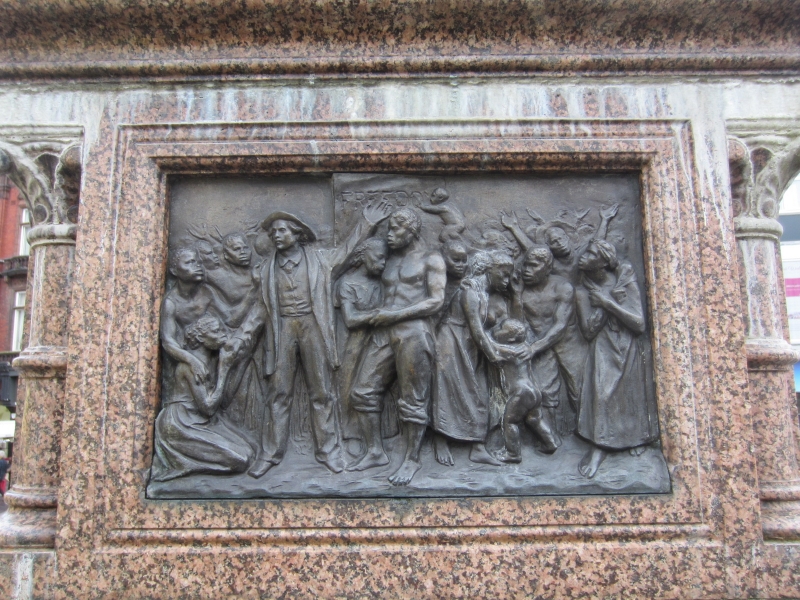 II
This list entry has been amended as part of the Bicentenary commemorations of the 1807 Abolition Act.

Statue of Joseph Pease, built 1875 and situated at the east end of Prospect Place, at the junction with Prebend Row, High Row and Northgate.

The sculptor was George Anderson Lawson; the foundry Cox and Sons. The statue is an electroform casting - zinc dipped in copper - one and a half times life-size (approximately 9ft). Pease is represented in middle age, wearing a Quaker lapel-less coat. He stands with his left hand at his side and his right tucked into the breast of his waistcoat, a pose he often assumed when speaking in public.

The pedestal is in two parts; the plinth, of grey granite, supports a decorative base of polished pink Shap granite with colonnettes at the corners. Set into each of the four sides of the pedestal is a bronze relief panel representing an aspect of Pease's public life. On the south face (the front), Pease's political career: according to a contemporary newspaper account, this shows Pease conversing with Lords John Russell and Palmerston on his entry into Parliament. On the west, slaves celebrating their emancipation with a jubilant Pease. On the north, industry is represented: a locomotive engine, with the chimneys and docks of Middlesbrough in the background. On the east, a schoolmistress instructs a group of standing children. 'Joseph Pease' is incised on the plinth in large Roman letters. On the base of the statue are the names of the sculptor and founders, and the date.

HISTORY: Joseph Pease (1799-1872) was born in Darlington, the second son of Edward Pease (1767-1858); Edward's contribution to the development of the Stockton and Darlington Railway, and to the establishment of Robert Stephenson & Co. as builders of locomotives, earned him the title 'father of the railways'. The Peases were Quakers, and Joseph remained committed to the family's interests in both business and religion. In 1826 he married Emma Gurney, a member of a prominent Norfolk Quaker family. At the age of 19, Joseph prepared the Railway's prospectus, and became its first treasurer; thereafter he worked to open up the mineral wealth of the north east of England, helping to establish Teeside as an important centre for iron production. Pease extended railway lines and persuaded mine owners to use them to transport their products, setting an example by buying collieries himself; he became the county's largest coal-owner. By his retirement in 1870, rail was the principal method of coal transportation.

In 1832 Pease was elected to represent South Durham in the House of Commons; he held the seat until 1841. Pease was Britain's first Quaker MP. He refused to take the usual Church of England oath on presenting himself in 1833, and a parliamentary committee allowed him to affirm instead. He did not take off his hat on entering the House, and retained his Quaker dress. It is said that he refused to canvas for votes, or to spend any money on his election. A supporter of the whig governments of Earl Grey and Lord Melbourne, Pease frequently spoke on matters of social and political reform.
He used his position in Parliament to speak eloquently for the abolition of slavery, working in concert with his relation-by-marriage, Thomas Fowell Buxton. His wife's cousin and Buxton's brother-in-law, Joseph John Gurney, was also active in opposing slavery. Abolition was a favourite cause of the Pease family: Pease's uncle Joseph had written tracts for the Anti-Slavery Society; this elder Joseph's daughter, Elizabeth Pease Nichol, played an important role in the movement. Outside the House, Pease devoted much of his energy to philanthropic and educational work - building and financing numerous schools in his industrial communities - and to the Society of Friends, of which he was a minister. From 1860 until his death he was president of the Peace Society.

A Pease Memorial Committee of 43 local businessmen was formed soon after Pease's death with the object of commissioning a painting for the town hall, and a statue. The sculptor, G. A. Lawson, originally from Edinburgh but based in London from c1862, is thought to have used a photograph of Pease aged 63 as his model. Funds were quickly raised, and the statue was unveiled on 28 September 1875, the fiftieth anniversary of the opening of the Stockton and Darlington Railway. The day was declared a public holiday throughout the district; 100,000 people are said to have filled the streets, 80,000 arriving from out of town in special trains. All the mayors of the United Kingdom were present for the unveiling of the statue, a service performed by the Duke of Cleveland, whose family had, over the years, attempted to thwart the development of the Peases' railways.

The statue was placed at a prominent junction in the centre of Darlington; standing at Prospect Place, Pease looks down High Row to the Gothic clock tower (q.v.) by Alfred Waterhouse which was his gift to the town in 1864. Behind the statue is a listed early C20 bank building; the restrained classical facade in pale limestone provides an excellent backdrop for the statue. The statue was originally surrounded by railings, with four gas lamps, but these were later removed, and in 1958 the statue was moved several metres as a result of a road redevelopment scheme. In 2006-7 the statue was cleaned and returned to its original position; the area surrounding it has been re-designed. The restored statue was unveiled on 24 October 2007, the 200th anniversary of the day on which the Act abolishing the slave trade was given royal assent.

REASONS FOR DESIGNATION
The statue of Joseph Pease is designated at Grade II for the following principal reasons:
* A handsome statue of 1875, with animated relief panels, by George Anderson Lawson.
* The statue is of particular historical interest, having been erected to commemorate Joseph Pease, a figure of national significance for his work as a railway promoter, as the first Quaker member of Parliament, and as an anti-slavery advocate.
* The statue forms a striking contrast with the early C20 bank before which it stands, and looks towards the Gothic clock tower which was Pease's gift to the town; both of these are listed.
NZ2888814612