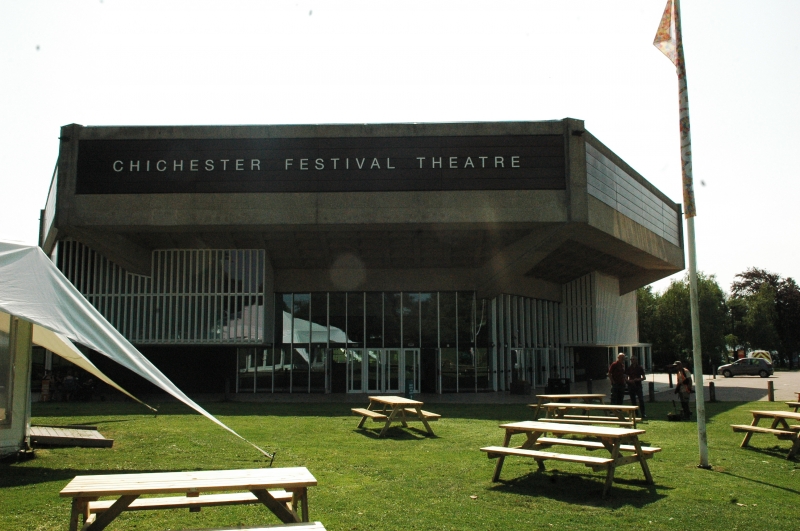 REPARATORY THEATRE. 1961-2 BY Powell and Moya for Leslie Evershed-Martin, founder of the Chichester Players and Chairman of the Chichester Festival Trust, extended 1966-7. Charles Weiss and Partners, engineers. Reinforced concrete, the principal structural elements bush hammered. Hexagonal form derived from economic and acoustic considerations, the stadium-plan auditorium (seating 1,374) raised over the single-storey foyer on cantilevers. These with the concrete tiering of the auditorium expressed, form a projecting canopy to the foyer roof and with a trabeated patterning. Tent-inspired main roof held by tension wires to rigid ring beam resting on solid staircase wells to side. Staircases expressed externally by white-painted vertical slats and blue vertical strip glazing; the foyer is wholly glazed to exploit views of the surrounding parkland. Foyer retains original fittings; box office and bar added in similar style in 1966. The chief feature of the auditorium is its apron stage of Canadian maple. This was the first 'open' stage completed in Britain; inspired by Tyrone Guthrie's similar stage at Stratford, Ontario, it combined elements of Roman and Greek amphitheatres with new research on Elizabethan staging techniques. The stage wall has a 'Juliet' balcony and minstrel gallery, along with links to the auditorium seating at balcony level to give maximum flexibility. Lighting and scene control box in opposite angle at first-floor level. Scene dock and dressing rooms added c.1967. The theatre was completed piecemeal in line with original intentions as money raised by voluntary subscriptions allowed. Leslie Evershed-Martin was an amateur enthusiast who promoted the concept of an annual festival with its own venue and conceived the notion of a 'tent in a park' out of which the design evolved. An actual tent was rendered impossible by fire regulations. Sir Philip Powell is the son of a Canon of Chichester Cathedral and had already built two houses in the city, and Evershed-Martin is said to have also been impressed by Skylon. Sir Lawrence Olivier brought the nascent National Company to Chichester in 1962, and there is a familial relationship between it and the Olivier Theatre designed by Sir Denys Lasdun in 1967-9. It was the first apron stage to be completed in Britain it was widely influential. No other significant theatre expresses both the influence of Elizabethan as well as modern ideas in staging that were being explored simultaneously at that time (it owes as much to the ideas of Leslie Hotson's 'Shakespeare's Wooden O' as to contemporary ideas of 'theatre in the round'. Its amphitheatre plan also has sources in ancient Greek theatre. Simon Tidworth considered it 'one of the few avant-garde theatres to attain architectural distinction in its own right' anywhere in the world.' The later office wing is not of special interest and the separate Minerva Theatre is not part of the listing. (Tabs: April 1962:20-26; Architect and Building News: 4 July 1962: 9-14; Architects' Journal: 4 July 1962: 25-40; Concrete Quarterly: July-September 1962: 27-29).