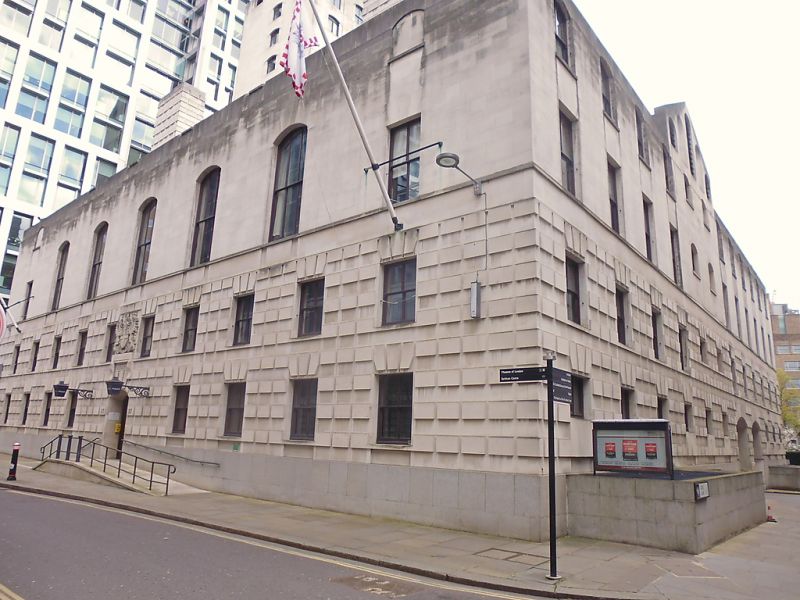 Police station, offices and flats 1963-6 by McMorran and Whitby for the City of London Police. Reinforced concrete frame clad in Portland stone and brick; slate roofs. A building of two linked halves. The lower portion of four storeys and basements, serves as police station with (originally) offices for special constables on ceremonial upper floor. Rusticated ground and first floor and large stacks. Regular facades with stepped fenestration: ten windows to first floor, seven to second of larger scale. Entrance under voussoirs and City coat of arms between traditional blue lamps on brackets. Rear elevation of six bays (with the third floor exposed); all windows are sashes with glazing bars.
To the side and rear a thirteen-storey tower of offices and flats, the latter with social facilities. Eight bays, their segmental-arched windows with glazing bars, under pitched roof with round-arched vent openings in gable. The two buildings linked and sharing common recreational facilities in basement, including the C. H. Rolth Hall. Interior not inspected but the public rooms understood to retain original features.
Donald McMorran was one of the most important architects to continue working in a sophisticated neo-classical idiom during the 1950s and 1960s. This is his best-known building; he specialised in police stations and this is his last and largest.
(Municipal Review, September 1966, London; Architects' Journal, July 1966, London, 6).