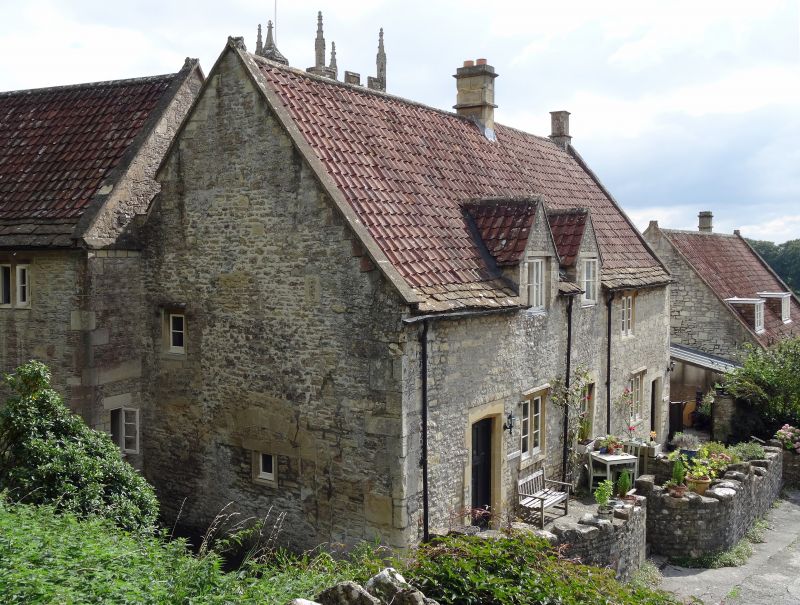 Entry Name: The Grange Numbers 1, 2 and 3 at Manor Farm

SOUTH STOKE
The Grange, Nos 1,2,and 3 at Manor Farm

Range converted into three cottages. C17, remodelled circa early C19 and late C19. Limestone rubble with stone dressings. Steeply pitched pantile roof with stone coping to gable ends. Ashlar axial and gable-end stacks. PLAN: L-shaped on plan. The main front [W] range appears to have been built in two phases, the left [N] part, No.2, has a large gable-end fireplace [blocked] and a 3-bay roof; the right [S] part, No.3, seems to have been open to the roof or with a loft open to the roof originally. In about the early C19 the whole range was converted into a dwelling and a wing [No.1] was built at the rear [NE]. Later in the C19 it was divided into cottages. An outbuilding was added later, extending the wing eastwards.
EXTERIOR: 1 storey and attic, and 2 storeys. Asymmetrical west front with late C19 chamfered stone Tudor arch doorways left and right; 12-pane sash in blocked central doorway and two small gables to left of centre with 2-light casements. South gable end has stone mullion windows and oval ventilator or owl-hole in gable. Rear [E] C17 3-light stone mullion window with hoodmould on ground floor, first floor left 16-pane sash and blocked doorway on left. Rear [E] wing has various C20 windows and small 2-light stone mullion window on north side.
INTERIOR: South end of west range [No.3] has 2-bay roof with cambered collar truss with two tiers of threaded purlins, and reused ceiling beam. North end of west range [No.2] has three chamfered cross-beams with hollow-step-stops, large blocked fireplace with newel stairs to side, circa early C19 panelled doors on first floor and 3-bay threded purlin roof, the collars replaced. Rear wing has tenoned staggered purlin roof with nailed collars.