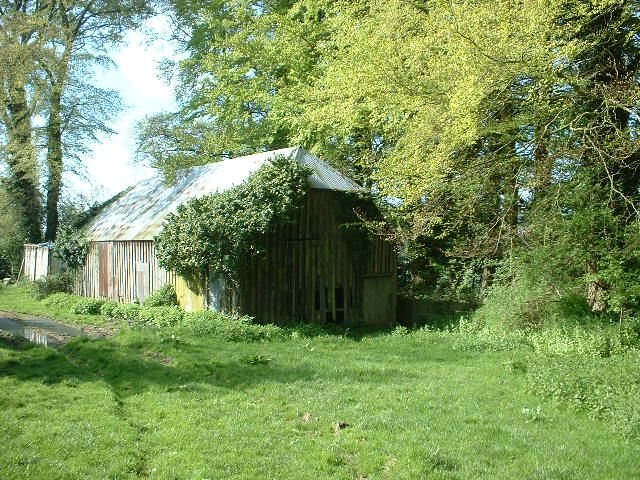 Barn. Circa early C19. Elm timber-frame clad in vertical boarding, and partly covered in corrugated sheet steel; the lower west side supported on staddle-stones. Corrugated sheet steel roof with half-hipped ends.
PLAN: Rectangular 8-bay frame; lower west side supported on staddle-stones. Later C19 waterwheel pit on west side.
EXTERIOR: Single storey. Cladding covers openings on east side. North end has double-doors on left and smaller door on right, both with plank doors. On west side later opening at centre for shaft to waterwheel [missing] , its brick and flint pit with head and tailrace remains.
INTERIOR: Small scanding 8-bay frame. The wall-posts have integral shaped brackets supporting arch-braces to col1ar-trusses with king-posts above, all bolted together and without carpentry joints. Purlins, principal and common-rafters intact. The wall-framing consists of rails and cross-bracing, onto which long studs are applied to the exterior. On the east side, blocked double doors in bay two from the north end, and loft doorway in bay six from the north end. At the centre of the west side a hole has been made for later machinery .