A Grade I Listed Building in Nether Compton, Dorset 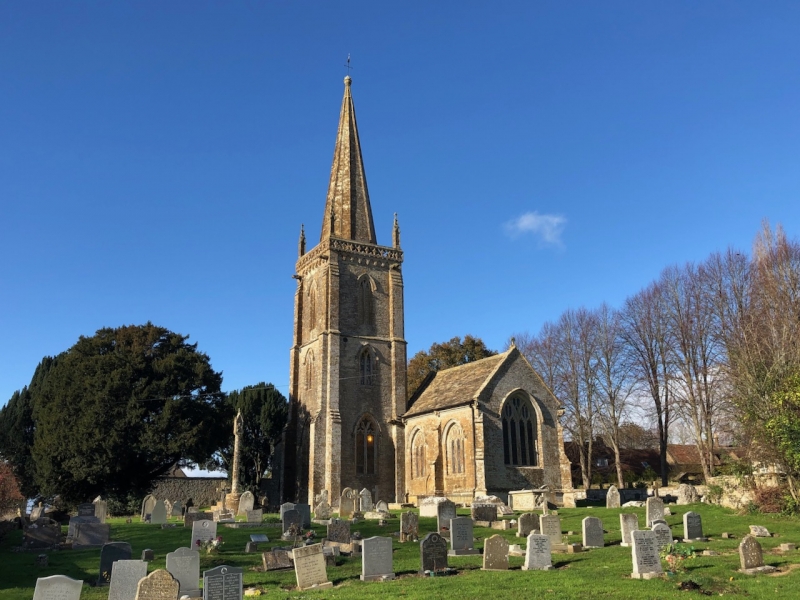 NETHER COMPTON
ST 5917 NETHER COMPTON VILLAGE
13/67 Parish Church of
31.7.61 St Nicholas
GV I
Parish Church. C13 nave, chancel and south porch. C15, north chapel
and west tower added. Restored in 1885, when the north chapel was
extended east, to form an organ chamber and vestry. Rubble stone walls,
ashlar faced with freestone dressings. Clay-tile roofs. Chancel has C19
diagonal and square buttresses. The restored C15 east window is of two tre-
foiled lights in a four-centred head. North wall has a C13 lancet window
now lighting the vestry. South wall has a C15 window of two cinquefoiled lights
in a square head. The C15 doorway has chamfered jambs and two-centred head.
Nave¼ South wall has 2 C15 windows of 3 cinquefoiled lights in square heads,
and a C19 central window. The south porch has a C13 outer archway, two-centred
and of two chamfered orders, the outer continuous and the inner springing from
corbel-shaftes with moulded capitals and fluted bases. West tower,C15, 3 stages
with a moulded plinth embattled parapet, angle-pinnacles and gargoyles, and an
embattled turret at the north-east angle. West doorway has moulded jambs and
segmental-pointed arch in a square head, with trefoiled spandrels and a
moulded label with returned stops. C15 west window of 3 cinquefoiled lights,
in a two-centred head. The bell-chamber has in each wall, a window of two
cinquefoiled lights, with a quatrefoil in a two-centred head, moulded reveals
and label. The north chapel has a C15 west bay and a C19 extension to the
east, built of partly re-used material. East wall of the vestry has a reset
C15 window, similar to that in the south wall of the chancel. The north wall
of the chapel has two C15 windows, and the west wall has one. Interior: chancel-
arch is C19. Roof: of nave is C15. Barrel-form with moulded ribs forming
8 bays each of 4 panels. There are carved bosses at the intersections.
Wall-plates are embattled and brattished, and have carved heads under
alternate ribs. Fittings: Consecration crosses on chancel, and on external walls,
RCHM. Font: octagonal bowl with moulded under edge, octagonal to square stem
and chamfered base, C14. Screen, under chancel-arch, stone, of 5 bays including
doorway and finished with moulded cornice, C15. Seating: C17 pews, made up with
some C19 work. (RCHM, Dorset I , p 100 (1)).