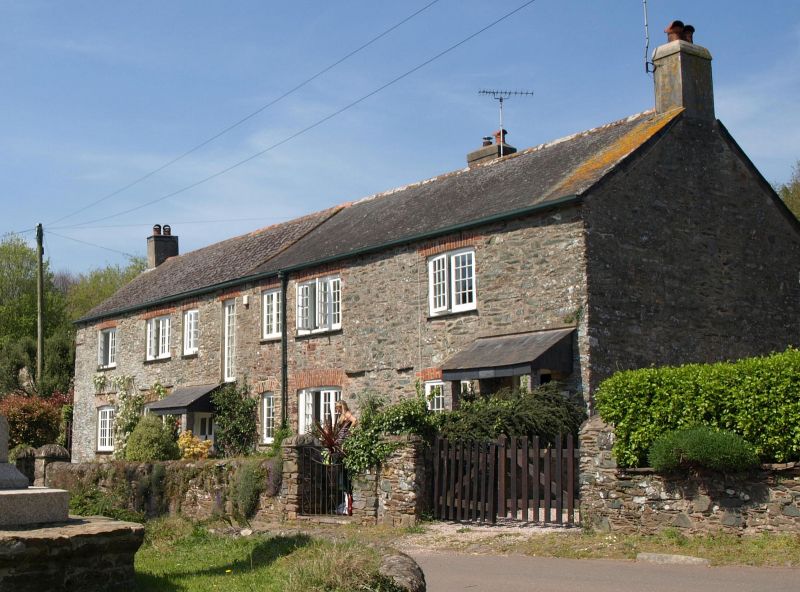 Range of 3 estate cottages, probably converted from one house. Probably C17,
converted into cottages in circa mid C19. Local stone rubble with red rick
window arches. Asbestos slate roof with gabled-ended main range and hipped
roof over rear wing. Rendered gable end stacks and projecting rear lateral
stack with rendered shaft.
Plan: The original plan is 4 rooms in the main single depth range with a
stairhall at the centre serving the left hand 2-room plan cottage (Cherry
Trees) which has a gable end stack for the left end room and a rear lateral
stack (now axial) serving both the right hand room and Rosalee Cottage in the
later wing behind. The right had cottage (Rosalee) occupies the 2 right hand
rooms of the main range, its left had room has rear lateral stack possibly
with an integral staircase and the right hand room is heated from a gable end
stack.
As the interior was not inspected the plan of the original house in
uncertain. It may have been 3 rooms and a through or cross passage, the lower
end to the left where the ground level is slightly lower, but the front wall
at this end appears to have been rebuilt so there is no external evidence for
a cross or through-passage at this end.
Exterior: storeys, long asymmetrical 7-window range. C19 2-light casements
with glazing bars; some with side lights containing sashes, an unusual
feature. The left hand windows of Cherry Trees to the left have been replaced
by C20 plastic casements and the sill of the central first floor window has
been lowered. All the windows are in their C19 openings with red brick
cambered arches and some of the ground floor windows have slate dripstones
above. 2 doorway to the left of centre and at the right hand end of the front
with C19 (Cherry Trees) and C20 (Rosalee) panelled doors and C20 open porches
with wooden shingle roofs.
Interior: not inspected but may retain its c19 joinery. The lateral stack
at the back of Rosalee probably has concealed a large fireplace and an
adjacent newel staircase.
Roof: some of the early structure may survive. Ashprington was the estate
village of Sharpham House (qv) and this row of estate worker's cottages was
created from what was probably originally a farmhouse.