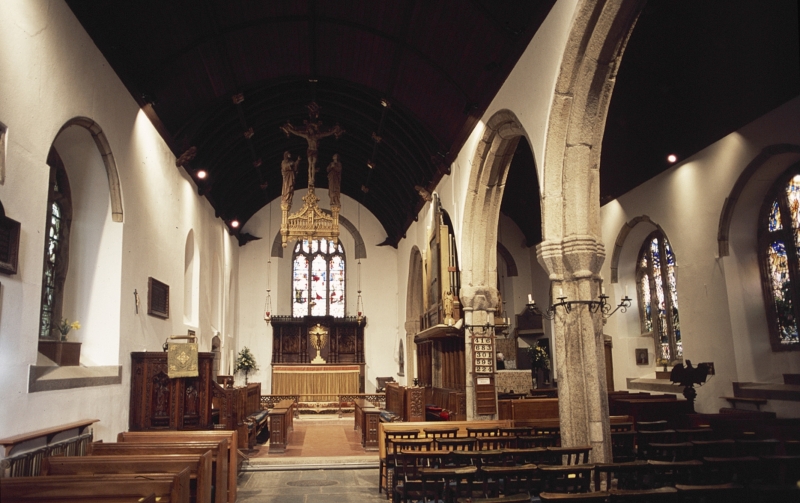 Parish church, Earliest fabric is C13 with major rebuilding in C15, a repair in
1685 and restored in 1904. Roughly coursed slatestone rubble walls. Gabled slate roofs.
Plan: nave, chancel, west tower, south aisle and porch. The earliest features
are the C13 windows in the chancel and the C12 font but most of the structure
dates from a major rebuild in the C15 which included a West tower and a South
chapel, aisle and porch of which the aisle apparently had new windows put in in
1685. At this date the north wall of the nave was rebuilt and the vestry might
also date from this period. The church was restored in 1904 by G. Fellowes
Prynne.
Exterior: 3 stage crenellated west tower with set back buttresses and 5-sided
stair turret on south side rising above parapet. 1 and 2-light cinquefoil belfry
openings. West doorway is of the characteristic rubble South Hams arch with
recessed inner arch. The window above it was entirely renewed in the restoration
in Perpendicular style. The north wall of the nave has 2 debased Perpendicular
windows (presumably of 1685). At the chancel end is a break in the stonework
beyond which is a single C13 lancet window which is partly obscured by the vestry
built on to the north of the chancel. This is crenellated with a large rubble
stack built onto the side of the north chancel wall. An early C16 3-light mullion window has been re-used in the vestry. The east end of the chancel has a completely renewed Perpendicular style window while the late medieval granite
Perpendicular window survives at the end of the south aisle. This is of 4 bays
with a chapel at the end. The chapel has a Perpendicular 3-light window whereas
the aisle has the larger debased Perpendicular windows with no tracery.
Buttresses between the windows, one above the priest's door divides to form a
shallow porch to it. 2 storey crenellated porch at west end of aisle with
diagonal buttresses at the front. Small segmental headed light on front above
doorway. 4-centred moulded granite arch with square hoodmould.
Interior: Porch has good foliage carved intersecting beamed ceiling with central
boss but floor above has been removed. Simple 4-centred arched chamfered south
doorway with carved spandrels. Internal walls of the church are plastered. 5 bay granite arcade of Pevsner A-type piers with simple moulded cup capitals and
chamfered 4-centred arches. 2-centred double tower arch with projecting imposts.
Wagon roofs entirely renewed. South chapel has a good C17 memorial to Thomas
Stephens (died 1658) and his wife Julian (died 1677) of Clannacombe House (q.v.)
depicting a lady and gentleman kneeling at prayer with 3 sons and 4 daughters. On the south wall fo the chapel is a wall memorial depicting the figure of a divine kneeling in front of a desk with inscription to Henrie Luscombe, Rector of the parish. Good C12 red sandstone tub font with chevron and cable moulding and
carved honeysuckle ornament around the outside.

Source: Beatrix Cresswell: Notes on Devon Churches in the Deanery of Woodleigh