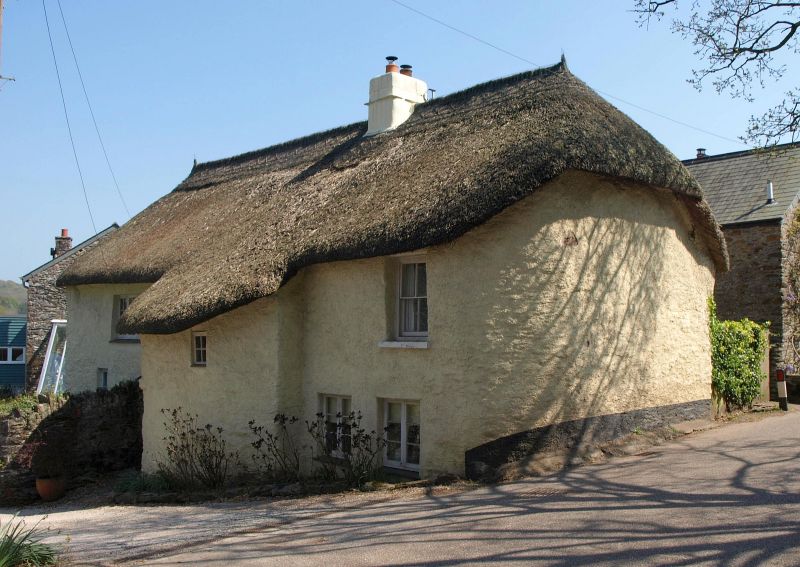 House converted into 2 or 3 cottages and now reunited to one house. Probably
mid C17, divided into 2 or 3 cottages in the C19 and reunited in the C20.
Roughcast stone rubble and possibly some cob. Asbestos sheet roof with half-
hipped ends, formerly thatched. Small roughcast rendered axial stack to right
of centre.
Plan: 3-room and through passage plan, the lower end to the left originally
unheated, the hall has an axial stack at its higher end and a stair turret at
the front; the relatively large inner room to the right is unheated. In the
C19 the house was divided into 2 or 3 cottages, the passage rear doorway was
blocked, the partition on the lower side of the passage removed and partitions
were inserted to form a small room at the back of the lower end with an axial
passage in front to a doorway in the lower end wall. A third doorway was
inserted into the front of the inner room, giving direct entry.
Exterior: 2 storeys. Asymmetrical north west front dominated by the large
stair turret to the right of centre, with a curved front and a lean-to roof
just below the main eaves and a small C19 fixed-light stair window with 4
panes. To the left of the stair turret a late C19 plank door and to the
extreme left a late C19 single-light casement on the ground floor.
Immediately to the right of the stair turret a late C19 4-pane sash on the
first floor and a narrow C20 ground floor window with a top-opening light.
The right hand corner is curved.
At the rear an asymmetrical arrangement of late C19 casements, some with
glazing bars, one to the right of centre may be the blocked rear doorway of
the passage.
There is another doorway in the lower left hand end wall with a plank door and
a canopy made of corrugated asbestos sheets.
Interior: Central room, the hall, has roughly chamfered cross-beams with run-
out stops and a fireplace with a concealed timber lintel. The lower left end
has C19 partitions and a late C19 cast-iron grate in the rear lateral
fireplace. The newel stair has wooden treads and risers.
Roof: The roof-space was not inspected but straight principals resting on the
wall plates can be seen in the first floor room.