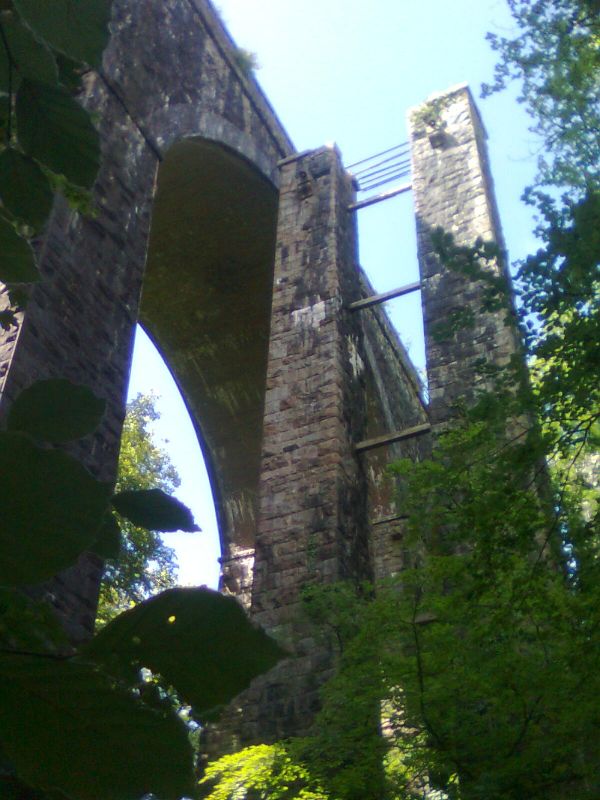 Railway viaduct and adjacent piers of an earlier viaduct. 1892 by Sir James Inglis for the South Devon Railway; the earlier viaduct was built in 1848 and designed by Isambard Kingdom Brunel.


Railway viaduct and adjacent piers of an earlier viaduct. 1892 by Sir James Inglis for the South Devon Railway; the earlier viaduct was built in 1848 and designed by Isambard Kingdom Brunel.

MATERIALS: The Inglis viaduct is built of rock-faced granite and blue engineering bricks. The surviving piers of the Brunel viaduct are of granite.

PLAN: Eight round arches survive within the Inglis viaduct, with six piers to the Brunel viaduct to the north.

This entry was subject to a Minor Amendment on 10 October 2016.

The Ivybridge Viaduct was originally designed by Isambard Kingdom Brunel for the South Devon Railway. It was opened in 1848 as part of the Totnes to Laira (Plymouth) line. This line consisted of the last extension of the Great Western Railway from Bristol to Plymouth. Originally built as a broad gauge railway, the line was converted for standard use in 1892 following a merger between South Devon Railway and Great Western Railway in 1876.

Due to the conversion of the line from broad to standard gauge, the original Brunel viaduct was replaced in 1893 by a Viaduct designed by Sir James Inglis, the General Manager and Consulting Engineer of the Great Western Railway.

Ivybridge Viaduct and adjacent piers are designated at Grade II, for the following principal reasons:

* Both the Inglis viaduct and the Brunel viaduct fulfil the criteria for national designation due to their architectural, engineering and historical interest.
* The Ivybridge Viaduct is part of a wider group of listed viaducts throughout South Devon each of which contains the standard gauge, late-C19 viaduct together with the redundant piers of a broad gauge, mid-C19 viaduct. These structures demonstrate the significant technological and engineering advancements in the railways throughout that period.