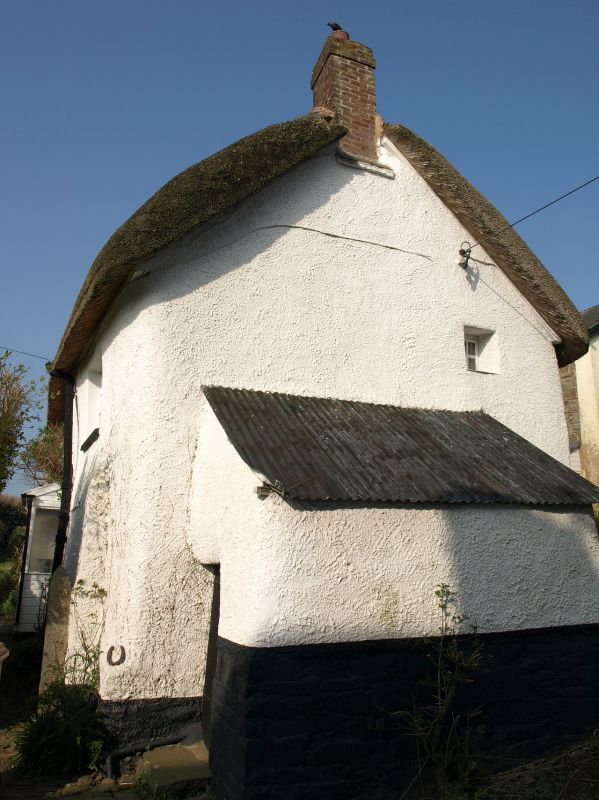 House, formerly 2 cottages. Probably C17, C18 and C19. Plastered cob on rubble
footings; stone rubble or cob stacks topped with C20 brick; thatch roof, replaced
with asbestos slate at left end.
3-room plan house facing south. The house has developed over the years. The right
(eastern) end room is the oldest part, a C17 1-room plan cottage with right end
stack. In C18 the centre room was added, probably as a second cottage. It is flush
with the front and projects a little to rear and with a very slightly higher roof
ridge. It was given a once-projecting end stack and a through passage through the
older room. In C19 the left (western) room was added. It is narrower than the rest
but flush with the front, It served as a shop. At about the same time the putative
cottages were united and the rear of the passage was blocked by a stair. 2 storeys.
Main house has irregular 4-window front which includes some C19 but most are C20
casements with glazing bars. The 2 first floor windows have thatch gables over.
The front doorway to right of centre contains a C19 6-panel door behind a C20
monopitch and slate-roofed porch. There is a fifth window and secondary door at
left end. Roof is gable-ended to right and hipped to left. C19 woodshed with
corrugated iron monopitch roof juts into the road on the right end. The rear wall
is blind.
Interior is largely the result of C19 refurbishment and C20 modernisation.
Nevertheless the original structure appears to be intact. There is no floor beam
showing in the C17 right room but the large fireplace lintel is soffit-chamfered
with exaggerated scroll stops. The central C18 room has a soffit-chamfered,
unstopped and partly waney crossbeam, and a similar finish to the oak lintel of the
rubble fireplace. The roof is inaccessible but the bottom of the truss principals
show and suggests that the original A-frame trusses survive.