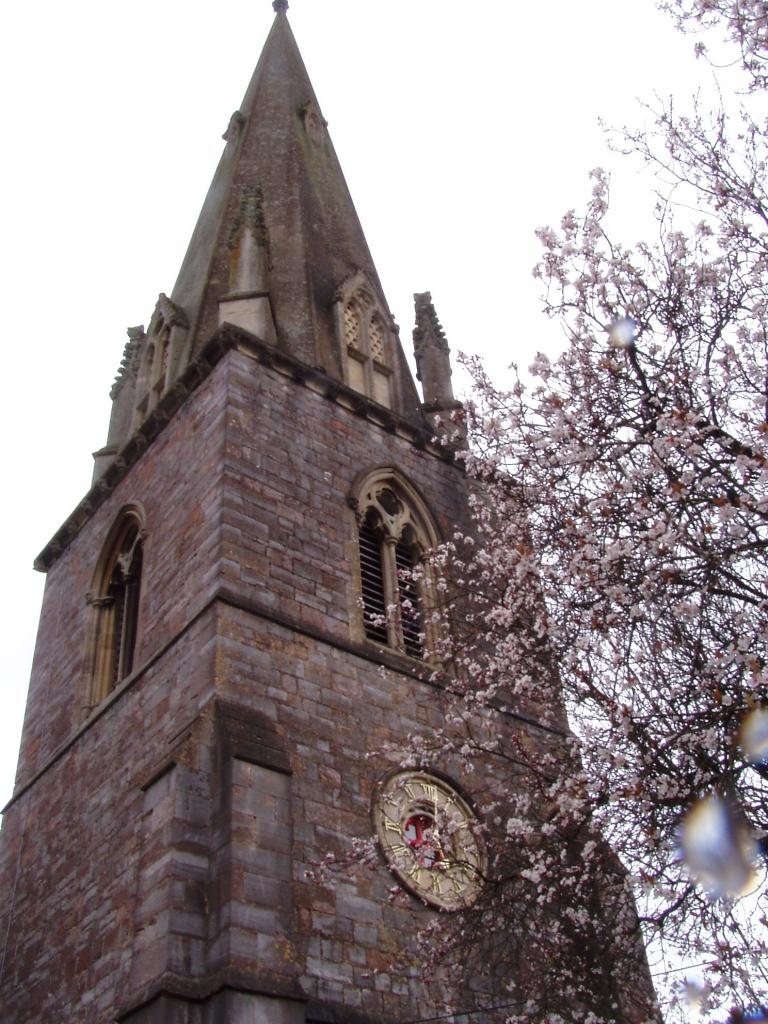 ST 01 SE UFFCULME BRIDGE STREET, (east side)
Uffculme
4/156 Parish Church of St Mary
5.4.66
- II*
Parish church. North arcade and tower arch early C14 as also (probably) the masonry
of the north wall and parts of the chancel; north aisle east extension and south
aisle arcade are probably contemporary with the rood screen which is generally
accepted as being early C15. Except for a few details, nothing else appears to be
medieval; north aisle and nave roofs C18, chancel roof and furnishings 1843; outer
south aisle added by John Hayward 1846-7; the west tower and spire rebuilt, using
some medieval material, 1849, probably under the direction of Hayward. Coursed
rubble limestone; slate roof. The C13 arcade is of Ham Hill stone.
Plan: west tower, and spire; nave, north and south aisles, outer south aisle,
north and south porches, chancel, north chancel aisle, sanctuary; vestry to north
of chancel.
Exterior. Steeple: Tower of 3 stages, corner buttresses with set-offs; 2-light
pointed Decorated belfry windows, lancets to bellringing chamber; west doorway with
2-centred arch and hoodmould. Clock in recessed stone roundel faces west. Corbel
table with (mainly 1840s) heads. Spire with corner pinnacles on broaches and 2-
light openings.
North aisle: west window, 4-light C19 Perpendicular with transom; north side of 5
bays (including battlemented porch with parvise approached by external stairs); 3-
light Perpendicular windows retain some medieval detail; 3-light east window.
Leanto vestry with its stack adjacent to chancel wall. Evidence of buildings, now
dismantled, to south of chancel. 4-light east chancel window with transom of 1849,
as all the 3-light windows of south aisle and the porch. 4-light east and west
aisle windows, with transoms.
Interior: 4-bay arcades; 3 bays of north with double chamfered arches, circular
piers, moulded capitals and bases. Similar treatment of tower arch. South arcade,
wavy moulding to arches and piers, with shafts at principal points, with separate
capitals. Outer aisle arcade a copy of the C15. North aisle to chancel with wide
arch, similar in detail to south aisle arcade. Sanctuary piscina. North aisle and
nave roofs ceiled with moulded plaster cornice; ceiled wagon roof to chancel with
ceilure over sanctuary; plaster ribs; south aisle roof panelled, and looks late
C19. Outer aisle, unceiled wagon roof - although this may incorporate some
medieval fragements it is almost entirely Hayward's work, and the dimensions
preclude the possibility of its having been moved from another part of the church
(as is generally believed to be the case).
Screens. 17 bays; it is fully discussed by Bond and Camm (see reference), and
probably pre-dates the screen at Halberton (1420) albeit only slightly. Complete
with coving, cornice and brattishing. The extension across the outer south aisle is
a remarkable piece of high-class craftmanship of the mid C19. The 3 north bays are
of 1828. C19 north parclose.
Furnishings. C16 panelling from elsewhere, reset in north-east chapel (Walrond
Chapel) and as a tower screen. Pulpit, dated 1715, and an un-Devonian Wren-Gibbons
style piece (as remarked upon by Pevsner). Polygonal stone font, of 1843 by Knight.
Reredos and stone altar table, carved by Knight form an attractive ensemble. The
seating arrangements of the church have been completely re-ordered, the altar
brought forward and the seating arranged in a half circle around it.
Glass: east window, 1849.
Monuments: (1) North chancel chapel; tomb chest of 1663, with portrait medallions
set between pilasters with caryatids, all a little Baroque in feel. Not insitu, but
now placed on and above the chest, 2 half-length busts, and an effigy of a man.
(2) early C19 mural monuments in sanctuary.
(3) a pair of mural monuments, each with a swathed urn, stand to either side of the
north door and both erected in 1810, and conceived as a matching pair, commemorating
various individuals.
Summary: Externally a striking church, with a very un-Devonian west steeple; the
impact it makes is almost entirely the result of Hayward's extensive restoration,
extension, and large scale rebuilding of 1846-9. The early C14 arcade is a
comparative rarity in the county. The rood screen is famous - the longest in Devon,
but part of it is C19 - and a good example of early C15 work, ie. before the bulk of
Devon screens were produced.
References: Pevsner, SD., pp. 300-1; F B Bond and Rom Bede Camm, Roodscreens and
Rood Lofts (1909), II, 356-7; figs 112; pl. 65A, 89A. Devon C19 Churches Project.