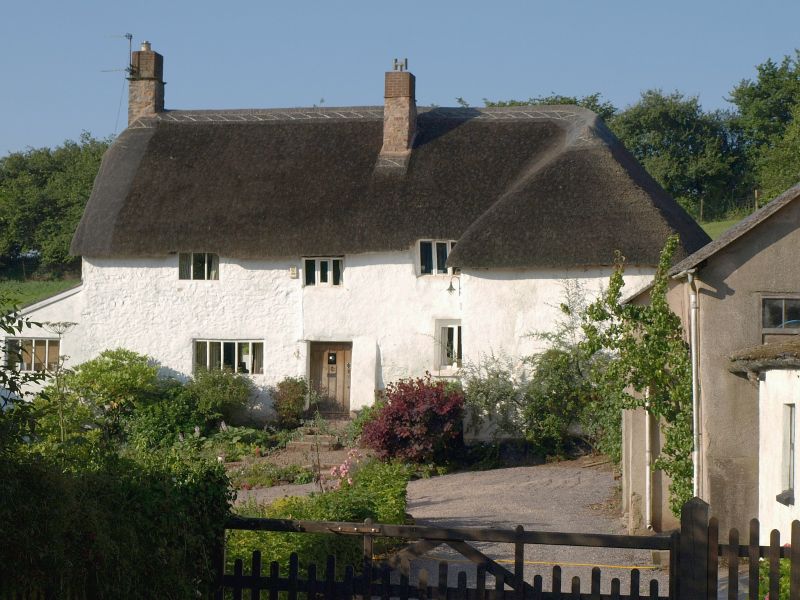 SAMPFORD PEVERELL
ST 01 NW
4/135
- East Pitt Farmhouse
5.4.66
- II*
Farmhouse. Late C15 - early C16 with major later C16 and C17 improvements, well-
modernised circa 1986. Plastered cob on stone rubble footings with sections all of
stone rubble; stone rubble stacks with stone rubble chimneyshafts extended with C20
brick; thatch roof.
Plan and development: L-plan farmhouse. The main block faces north-east and is
built across the hillslope. It has a 3-room-and-through-passage plan. At the right
(north-western) end there is an unheated inner room, probably a dairy originally.
The hall has an axial stack backing onto the passage. The service end kitchen has a
large gable-end stack with what appears to be a large curing chamber projecting to
rear. 1-room plan unheated extension projects at right angles in front of the inner
room.
The smoke-blackened roof over the hall and inner room indicates that the original
house was open to the roof from end to end, divided by low partitions, and heated by
an open hearth fire. The inner room was floored over in the mid C16. The hall
fireplace was probably inserted in the late C16. The service end was rebuilt as a
kitchen in the early or mid C17. At about the same time the hall was floored over.
The date of the front extension is not clear. It is probably C17 but may be C16.
This extension was originally domestic but it and the inner room have long been
relegated to an agricultural store, maybe a cider house. Circa 1986 a stair turret
was built projecting from the back of the passage. The hall and service end is 2
storeys. The inner room formerly was 2 storeys but is now open to the roof. The
front block is also now open to the roof but was formerly 2 storeys. It has been
much rebuilt and may once have been a parlour cross wing.
Exterior: the main front has a not quite symmetrical 3-window front of various
casements. To right of the door is a C20 casement with glazing bars. The rest are
earlier, oak-framed, and contain rectangular panes of leaded glass. The oldest is
first floor right, a 4-light window with chamfered mullions. The other 2 first
floor windows are late C17 - early C18 with flat-faced mullions and the ground floor
left 5-light window is probably C18. The passage front doorway is roughly central
and contains a C20 door in traditional style at the top of a flight of stone steps
up from the pitched cobble forecourt. The rear windows are all C20 but are oak-
framed. The front of the wing is blind, but there is a C19 doorway with a tiny
window alongside on the inner side. The main block is gable-ended to left and
hipped to right. The front wing roof is hipped.
Interior: on the upper (hall) side of the passage the screen beyond the back of the
stack is missing. In the hall the large fireplace is stone rubble with soffit-
chamfered oak lintel. The early C17 axial ceiling beams are soffit-chamfered with
bar runout stops. At the upper end is the lower part of a full height oak large-
framed full height crosswall in which the timbers are of large scantling. It
includes a round-headed arch doorway converted from the original shoulder-headed
arch. At the back the central king stud is fashioned to provide a ledge on which
the axial beam of the former inner room ceiling rested. There is another full
height oak large-framed crosswall between the inner room and front wing. On the
lower side of the passage (to the former kitchen) a short length of an oak plank-
and-muntin screen is exposed. In the former kitchen the crossbeam is soffit-
chamfered with scroll stops. The kitchen fireplace is blocked although the oak
lintel and a large brick-lined oven can be seen in a cupboard. The curing chamber
is completely blocked up although there seems to have been an external doorway into
it.. The inside is whitewashed and it seems that it was once converted to newel
stair. The roof over the former kitchen is a C17 replacement carried on A-frame
trusses with pegged and spiked lap-jointed collars. However the original roof
remains over the hall with its ridge and purlins projecting over the inner room.
The open truss is a side-pegged jointed cruck truss of large scantling. It has a
cranked collar, the soffit of which is chamfered with a carved boss. Some of the
single set of windbraces still remain. This roof structure is smoke-blackened from
the open hearth fire. The secondary framing at the upper end of the hall is sooted
on the hall side only proving that it was erected before the hall fireplace was
inserted.
East Pitt is a well-preserved and attractive example of a multi-phase Devon
farmhouse. The quality of the original work is superior to the usual farmhouse
standard of the time.